Tis The Season To Spread Joy 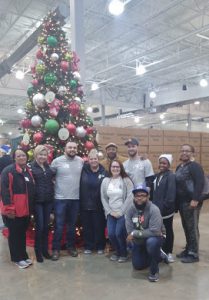 During the holiday season there are many families that don’t get to experience Christmas joy. This year the LL 1725 Young Workers changed that. Joined by the Women and Human Rights Committee they volunteered at Operation Christmas Child. This charity works every year with Samaritan’s Purse to put together shoe boxes filled with gifts for children in third world countries. Shoe boxes include soap, paper, pencils, toothbrushes and other everyday items we take for granted. Last year 2.4 million shoe boxes were processed in LL1725 hometown of Charlotte, NC.

Local 63 Young Machinists are raising funds to bring presents and Christmas trees to foster children. Other members of Local 63 are helping the cause by donating lights, ornaments and toys. These Young Machinists are truly making a better life for foster kids this holiday season. 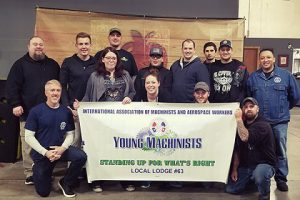 North Carolina Machinist Raise Money for local children’s hospital. So proud of the way LL 1725’s Young Machinists Committee teams up with the local’s Women’s and Human Rights Committees. More than 100 people took a swing at raising money this week for the Charlotte, NC, Levine Children’s Hospital at the IAM Local 1725 first annual Union Golf Tournament hosted by the local’s Women’s/Human Rights and Young Workers Committees. The outing took place at Larkhaven Golf Club where teams competed in the four-man scramble format tournament. The event raised nearly $2,500 for the hospital.

In October of 2015, the IAM held a Women, Young Workers and Human Rights Conference where we pledged to “Change the World.” We began having the conversations necessary to empower young workers to connect union involvement to a greater social movement. The Young Machinist would like to remind all of you old-timers that– It”s not your Granddaddy’s Union anymore 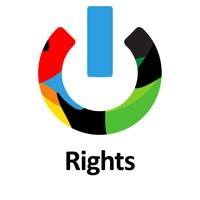 In dark and bitter cold

Each one possessed a stick of wood,

Or so the story’s told.

Their dying fire in need of logs,

The first woman held hers back.

For on the faces around the fire,

She noticed one was black.

The next man looking cross the way,

Saw one not of his church,

And couldn’t bring himself to give

The fire his stick of birch.

The third one sat in tattered clothes,

He gave his coat a hitch.

To warm the idle rich?

The rich man just sat back and thought

Of the wealth he had in store.

And how to keep what he had earned

From the lazy, shiftless poor.

As the fire passed from sight,

For all he saw in his stick of wood

Was a chance to spite the white.

The last man of this forlorn group

Did naught except for gain

Giving only to those who gave

Was how he played the game.

Was proof of human sin.

They didn’t die from the cold without, They died from —The Cold Within.