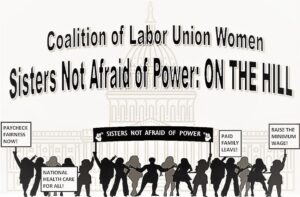 On the first anniversary of the original Women’s March on Washington events were planned across the nation with a new emphasis on getting out the vote for the 2018 elections. In support of these goals CLUW members once again took to the streets as part of a grand show of women’s power and readiness to create change through political engagement.

At the rally before the march in the nation’s capital President Elise Bryant, as one of the guest speakers, began her address with excerpts from “I am a Union Woman” singing “I am a union woman. Just as ‘strong’ as I can be. I do not like the bosses. And the bosses don’t like me”.  She challenged the crowd with, “A woman’s place is in her union. And let me add to that … a woman’s place is in the White House and we are coming for it!” Be sure to view her full rallying cry by watching the video above.

In addition to Washington, DC CLUW delegations marched with their communities throughout the country. Millie Hall, president of the Metro-Detroit chapter spoke of how chapter members made it their mission at the Lansing March to “stand up, speak up, stand behind and support our UAW sister Cindy Garcia, whose husband was deported to Mexico after living in the United States for 30 years.” Stating that “this is our moment for our voices to be heard.”

In California the secretary of the LA CLUW Chapter, Analisa Swan shared that she marched “in support of LGTBQIA+ equality, civil rights, DREAMERS, women, POC, immigrants, access to healthcare”. While over in Louisville, KY Derby-City Chapter President Vanda Moore said “the women brought the fire with their words” and PA State Vice President Koren Parker called the Philadelphia event a “total success” and was inspired by the “overwhelming amount of young activists.” 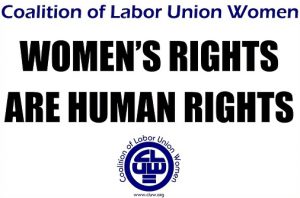 What Is CLUW? The Coalition of Labor Union Women is America’s only national organization for union women. Formed in 1974, CLUW is a nonpartisan organization within the union movement. The primary mission of CLUW is to unify all union women in a viable organization to determine our common problems and concerns and to develop action programs within the framework of our unions to deal effectively with our objectives. At its founding convention in Chicago, Illinois, CLUW adopted four basic goals of action: to promote affirmative action in the workplace; to strengthen the role of women in unions; to organize the unorganized women; and to increase the involvement of women in the political and legislative process. These goals continue to be the cornerstone of CLUW’s activities as members speak out for equal pay, child and elder care benefits, job security, safe workplaces, affordable health care, contraceptive equity, and protection from sexual harassment and violence at work. With members from 54 international and national unions across the U.S. and Canada, CLUW has a strong network of more than 40 chapters. CLUW is endorsed by the AFL-CIO and its international and national unions. CLUW local chapters educate members, keep them up-to-date on a variety of issues of concern to working families, and provide a support network for women in unions.