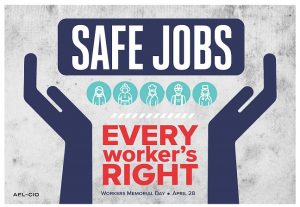 While coming together to remember those who have lost their lives and to demand safe workplaces and good jobs for all workers, which are the centerpieces of Workers Memorial Day, extra precautions may be necessary when planning for any Workers Memorial Day event in 2020 due to the COVID-19 outbreak.

In 1989, the AFL-CIO declared April 28 “Workers’ Memorial Day” to honor the hundreds of thousands of working people killed and injured on the job every year. April 28 is the anniversary of the date the Occupational Safety and Health Act of 1970 went into effect, and when the Occupational Safety and Health Administration was formed (April 28, 1971).

Previously, in 1984, the Canadian Union of Public Employees (CUPE) established a day of mourning. The Canadian Labour Congress declared an annual day of remembrance in 1985 on April 28, which is the anniversary of a comprehensive Workers’ Compensation Act passed in 1914. In 1991, the Canadian parliament passed an Act respecting a National Day of Mourning for persons killed or injured in the workplace, making April 28 an official Workers’ Mourning Day.

More facts – In 2018, work-related injuries claimed the lives of 5,250 U.S. workers, a 2% increase from 2017. This number represents a rate of 3.5 fatal injuries per 100 full time equivalent workers.  Although deaths resulting from work-related injuries are captured by surveillance systems, most deaths resulting from work-related illness are not. In 2007, an estimated 53,445 persons died from work-related illness. In 2018, employers reported approximately 2.8 million nonfatal injuries and illnesses to private industry workers via the annual Survey of Occupational Injuries and Illnesses. An estimate of the annual burden of chronic occupational illness in the US is between 460,534 and 709,792 additional cases per year.

Occupational injuries and illnesses have broad social and economic impacts on workers and their families, on employers, and on society as a whole. There are several ways to estimate those consequences, such as methods that focus on medical costs, productivity losses, health-related quality of life losses, or risk-money tradeoffs that consider pain and suffering. Based on methods that focus on medical costs and productivity losses, the societal cost of work-related fatalities, injuries, and illnesses was estimated at $250 billion in 2007. Methods that include consideration of pain and suffering would result in a higher estimated societal cost.

There are multiple sources of statistics for work-related injuries and illnesses in the United States. The NIOSH webpage, Worker Health Charts, allows for the creation of custom charts from multiple data sources. Users can visualize rates, distribution, and trends in workplace injuries, illnesses and deaths, using data not easily available elsewhere.

NIOSH is working to better describe the burden of fatalities, injuries, and illnesses suffered by workers; learn more about “Burden, Need and Impact” the NIOSH framework for identifying research priorities.

While significant progress has occurred since the passage of the Occupational Safety and Health Act, much more remains to be made. Even as we continue efforts to eliminate the legacy hazards of the 20th Century, we are also called to address the emerging challenges of the 21st Century economy.

“The U.S. Department of Labor is committed to ensuring that American jobs are safe jobs. Today is a day to remember that since 1971, the Occupational Safety and Health Administration (OSHA) has been working to help make workplaces safer. OSHA has aided in the creation of a safe culture for American workplaces because every worker in America should return home at the end of each and every workday, safe and unharmed. Workplace safety is everyone’s business and must be everyone’s priority. Safety must start on day one and be a continuous process. OSHA will continue to work with its partners across the country – employers, workers, trade associations, labor unions, and safety and health professionals – to ensure that every workplace is safe and healthful. Together, we can continue to protect the health and safety path that leads to safe, family-sustaining career opportunities”.

OSHA provides guidance and resources for employers and workers on the control and prevention of COVID-19. Some sections of this guidance apply to all workers and employers, while other sections focus on those at lower risk of exposure and those with increased risk of exposure, including workers involved in: