Charles Young… Buffalo Soldier….Charles Young graduated from West Point in 1889. Young would later serve in the 7th, 9th and 10th Cavalry, command Fort Huachuca, and retire as a Colonel. He is a member of the MI Hall of Fame. 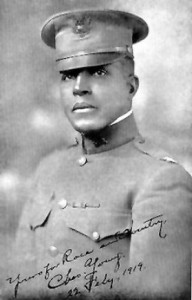 Fort Huachuca. Ariz. (July 9, 2014) — More than 10,000 black men served in the regiments honorably called the Buffalo Soldiers. Some of these men, such as Henry O. Flipper and Benjamin O. Davis, are historically prominent and fairly well-known to students of American history. However, a great number remain unknown or their accomplishments buried as footnotes to history. One such man with a significant link to Fort Huachuca and military intelligence is Colonel Charles D. Young.

Charles Young was born in May’s Lick, Kentucky, in 1864. In 1889, he became the third African American to graduate from the U.S. Military Academy. He was immediately assigned to the 10th Cavalry, stationed at that time in Nebraska. Over the course of the next 28 years, Young was assigned to the black regiments of the 9th Cavalry and the 25th Infantry, as well as the 9th Ohio Volunteer Infantry during the Spanish American War.

Young’s military career introduced him to a variety of responsibilities. He spent nearly four years as a Professor of Military Science at Wilberforce University, Ohio, and in 1903, he served as the acting superintendent of parks at Sequoia and General Grant (now Kings Canyon) National Parks in California.

One highlight of Young’s career and for which he is perhaps most renowned occurred during the Punitive Expedition in pursuit of Pancho Villa who had murdered American citizens in Columbus, New Mexico. On April 1, 1916, Major Young led his troops in a successful cavalry pistol charge against Villista forces at Aguas Calientes, Mexico, driving back approximately 150 enemy troops with no losses to Young’s squadron.

Two weeks later, at the Hacienda Santa Cruz de la Villegas, Young again rode with his troops to relieve a severely wounded Major Frank Tompkins and his 13th U.S. Cavalry pinned down by Mexican government troops. Young’s reinforcement of Major Tompkins at a critical time is credited by many historians as preventing a larger war between the United States and Mexico.

In addition to his brave service with the cavalry, Young’s lesser known accomplishments took place in the field of military intelligence, particularly as a military attaché. Young was the first African American appointed to serve in that capacity since the birth of the attaché system in 1889. He was an accomplished linguist fluent in Latin, Greek, French, Spanish, and German. 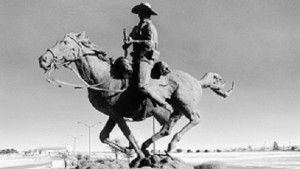 From 1904 to 1907, Young served in Port Au Prince, Haiti, where he made an extended military reconnaissance of the country and the neighboring Republic of Santo Domingo and produced maps of much of the terrain. In 1912, he was selected for attaché duty in Liberia, where he advised the Liberian constabulary and supervised the construction of new roads to provide military lines of communication.

For his services there, the NAACP awarded Young the Springarn Medal, an annual award recognizing outstanding achievement by an African American. Young remains the only member of the U.S. military services to receive this award since its inception in 1915. For his attaché service, Young was also inducted into the Military Intelligence Corps Hall of Fame in 1999.

Much to his dismay and despite an exceptional career, Colonel Young was medically retired in 1917 for high blood pressure and Bright’s disease purportedly incurred during his attaché service in Liberia. He was, at this time, the highest ranking African American in the U.S. Army, and one of only three black commissioned officers. Anxious to command black troops in France in World War I, the 53-year-old colonel rode on horseback from his home in Ohio to the War Department in Washington, D.C., to demonstrate his fitness for duty. Nevertheless, Charles Young’s quest to serve during World War I was denied, a decision described by some historians as a product of prejudice on the part of senior leaders in the military and Presidency. Young, however, was recalled to active duty in 1919 to serve again as military attaché in Liberia. He died on January 8, 1922, in that post. At the time he was on a research expedition in Lagos, Nigeria. Although initially buried in Nigeria, his body was returned to the U.S. and interred at Arlington National Cemetery in Washington, D.C. in 1923.

On a personal note, Charles Young married Ada Barr in 1903 and had two children, Charles Noel, born in 1907 and Marie, born in 1909. He counted among his friends the founder of the NAACP, W.E.B. DuBois, and Dayton poet Paul Laurence Dunbar. He was not only a fine soldier and leader, but also a poet, playwright, composer, and musician. He was known for his generosity, politeness even in the face of harsh racial discrimination, and dedication to his country and his race.

Secretary of the Navy Theodore Roosevelt marveled at the man who “by sheer force of character…overcame prejudices which would have discouraged many a lesser man….He approached life with the single purpose of seeing what he could do for this nation….What he has done will remain with us in the country as a constant inspiration and guide of the generations to come.”