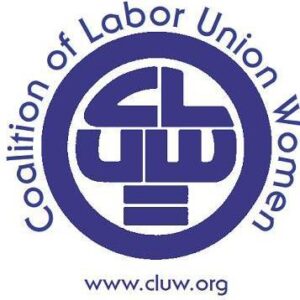 The Coalition of Labor Union Women (CLUW) is a non-partisan organization within the trade union movement formed in 1974 to articulate the concerns of working women. Although not a union itself, CLUW strives to make organized labor — and the public in general — sensitive to the needs of working women and their families.

CLUW gives individual working women the authority and support they need to create positive changes in their workplace, their union, and their government. CLUW’s mission is to improve the participation, position, and influence of women in trade unions and society. To achieve this, it educates and trains women for effective action, organizes conferences and workshops, influences courts and voters, and supports strikes and boycotts.

CLUW’s key concerns center on working women’s lives. As such, it sponsors a range of education programs to teach members how to gain equal pay and promotion for women, end discrimination against women and minorities in the workplace, expand pregnancy and child care benefits, combat government intervention in reproductive freedom, improve health and safety in the industrial and white collar workplaces on issues including indoor air quality and reproductive health, oppose regressive taxes that hit working women the hardest, support fair tax programs that are based on ability to pay, develop national health insurance, and promote affirmative action.

By promoting affirmative action in the workplace, strengthening the role of women within their union, organizing unorganized women, and increasing the involvement of women in political and legislative processes, CLUW unifies union women, identifies their problems, and concerns, and develops programs to address them.

CLUW has many chapters across the U.S. representing the interest of hundreds of thousands of working women in more than 60 unions.