The Coalition of Labor Union Women (CLUW) is America’s only national organization for union women. Formed in 1974, CLUW is a nonpartisan organization within the union movement.

The primary mission of CLUW is to unify all union women in a viable organization to determine our common problems and concerns and to develop action programs within the framework of our unions to deal effectively with our objectives.

At its founding convention in Chicago, Illinois, CLUW adopted four basic goals of action: to promote affirmative action in the workplace; to strengthen the role of women in unions; to organize the unorganized women; and to increase the involvement of women in the political and legislative process.

These goals continue to be the cornerstone of CLUW’s activities as members speak out for equal pay, child and elder care benefits, job security, safe workplaces, affordable health care, contraceptive equity, and protection from sexual harassment and violence at work. 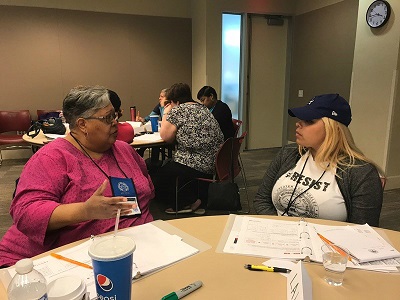 On November 29th the National Executive Board voted to hold the 20th Biennial Convention from October 15-18, 2019 at the Tropicana Las Vegas – A Doubletree by Hilton hotel and designated the theme as “SNAP: Coming Together to Change the World!” The first day will be one of interactive workshops designed to further CLUW’s work in preparation for the 2020 elections and to build CLUW as a force of women in labor. In prioritizing CLUW’s growth, the NEB voted to charter the Grand Prairie/Arlington Texas chapter. Welcome aboard!!

President Bryant opened the session by challenging the over 100 delegates and observers from throughout the country to FEAR: Face Everything and Rise!  She spoke about the amazing election results for women including that 14 women were elected to the Senate and 102 to the House; 45 women of color were elected for the first time; the first woman senator from Tennessee was elected and two first time Native American sisters and two first time Latina sisters from Texas were elected; youngest woman elected to Congress; first Muslim women; first woman senator from Arizona, out and bisexual; 589 women ran for office. She concluded with, “This victory is ours – we did this, it was our hard work!”