The local lodge Organizing Committee assist in the Lodges’ efforts to create more (dues paying members) through internal organizing efforts. Every Steward in the Local Lodge is by default an organizer, and thus a member of this committee. We must never stop our organizing efforts. Organizing is “Job One” and we will continue to organize the unorganized. There are many different methods and practices that can be used to make your lodges Internal Organizing efforts more effective. Try a variety of things. Be creative. Remember being a Union member is special.

There are a few challenges to modern day organizing, primarily due to outcomes of political elections. This is one of the primary reasons unions work hard to convince it’s members and their friends and family members to support and elect worker friendly political candidates.

The IAM has over 5,000 Collective Bargaining Agreements representing workers in a wide variety of industries. Unions are about a simple proposition: By joining together, working women and men gain strength in numbers so they can have a voice at work about what they care about. They negotiate a contract with their employer for things like a fair and safe workplace, better wages, a secure retirement and family-friendly policies such as paid sick leave and scheduling hours. They have a voice in how their jobs get done; creating a more stable, productive workforce that provides better services and products.

The American Federation of Labor and Congress of Industrial Organizations (AFL-CIO) works tirelessly to improve the lives of working people. We are the democratic, voluntary federation of 55 national and international labor unions that represent 12.5 million working men and women.

We strive to ensure all working people are treated fairly, with decent paychecks and benefits, safe jobs, dignity, and equal opportunities. We help people acquire valuable skills and job-readiness for the 21st century economy. In fact, we operate the largest training network outside the U.S. military.

Our work is anchored in making sure everyone who works for a living has family-supporting wages and benefits and the ability to retire with dignity. We advance legislation to create good jobs by investing tax dollars in schools, roads, bridges, ports and airports, and improving the lives of workers through education, job training and a livable minimum wage.

We advocate for strengthening Social Security and private pensions, ensuring fair tax policies, and making high-quality, affordable health care available to all. We fight for keeping good jobs at home by reforming trade rules, reindustrializing the U.S. economy and providing worker protections in the global economy.

We stand firm in holding corporations accountable for their actions. We help make safe, equitable workplaces and give working people a collective voice to address workplace injustices without the fear of retaliation. 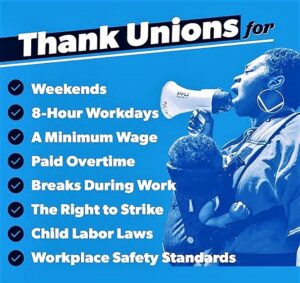 Why A Union? – You don’t have to go far these days to hear negative things being said about unions. Many politicians, employers and people in the media openly criticize the labor movement. They say that unions are out of touch and out of date. They also claim that unions no longer “deliver the goods” for their members. You must not fall for that. Now is the time for workers to unite. By forming a union, workers provide themselves with the opportunity to secure a voice in their workplace and ensure justice on the job. Union members are able to sit down with management as equals and bargain for better workplace conditions. For some, that might be higher wages and better benefits. For others it might be job security or fair treatment. Regardless of your specific needs, the union is here to help. Union members:

For more than 120 years, unions have fought for workers’ rights and the benefits so often taken for granted. Benefits like sick pay, leaves of absence, bereavement leave, holidays, vacations, retirement security and healthcare. At the IAM, you will find one of the largest and most experienced unions in North America. You will find Machinists in aerospace, transportation, the federal government, automotive, defense, woodworking and several other industries. We represent workers at companies as diverse as Harley-Davidson, Southwest Airlines, Boeing, Pratt & Whitney, Freightliner, Tennessee Valley Authority and the Bureau of Engraving and Printing. In the federal government unions have existed for many, many years. This year in fact represented 50 years since then President John Fitzgerald Kennedy signed a bill to allow “collective bargaining” in the federal government. If you are a federal employee and there is no restriction on whether you may join a union, my advice to you is sign up right away. These are trying times for federal workers. There is power and strength in numbers. Make sure you are in those numbers.

Former Virginia District Lodge DBR, Larry Young, now a GLR in the Mid-Western Territory, shares the struggle and determination it took to finally get justice on the job and respect for the Union. When the IAM represents a group of Employees we use every resource available to win.

Organizing Despite So Called Right-to-Work

By June 2014, the membership of IAM District 110 in eastern North Carolina had fallen to 588 members. The lack of dues money coming in meant the district, which mainly represents civilian workers at area military bases, was finding it difficult to adequately represent workers in each of its four locals. Their plan to get the district back on its feet started with organizing the members they already represented. North Carolina is a so-called right-to-work state, meaning workers can choose to not pay dues even as they benefit from IAM representation and a collective bargaining agreement. Stewards were challenged to hit the shop floor to ask every non-member to join the cause. Grand Lodge Representative Joe Greaser incentivized the challenge by offering an IAM-monogramed leather jacket to any member who brought in more than 25 members. 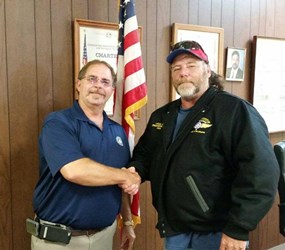 The district got a big jolt in November 2014 when URS contract workers at Marine Corps Air Station Cherry Point ratified their first Collective Bargaining Agreement, adding over 50 new members. Organizing efforts for eight more employees on that contract continue today. A year later, after winning an election to represent 135 EMS Services maintenance workers at Camp Lejeune and New River Marine Bases, workers ratified their first collective bargaining agreement. Hot off the heels of the first contract for EMI Workers, Phoenix Management workers at Camp Lejeune and New River were granted recognition and are now working on proposals for a first contract. The 15 employees unanimously signed authorization cards to petition for recognition, which the company granted recognition. “Their solidarity has already convinced the company that an election was not necessary,” said Anthony Cruz, directing business representative for IAM District 110. “The Base is aware of the growing solidarity of Service Contract Workers. 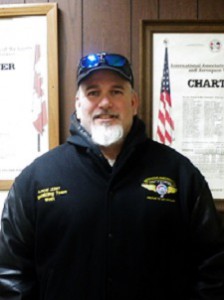 Former Chief Steward and Federal Employee, Walt Doyle pictured here, was the first to receive a leather jacket for his outstanding organizing success. “Everyone wants to be on the winning team, and ‘just win baby’ is the motto of the Southern Territory when it comes to organizing,” said IAM Southern Territory General Vice President Mark Blondin.