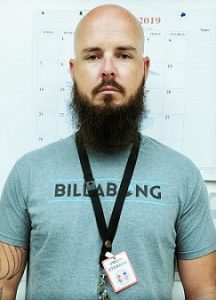 This month Local Lodge 2297 is proud to present Paul E. Henriksen Sr. as our selection for “Steward of the Quarter”.

Paul was born April 25th, 1983 and was raised in Oak Lawn Illinois where he went to Argo Community High School, approximately 20 minutes south of Chicago. Paul joined the Marines during his junior year of High School and after graduating in 2002 he entered basic training.

While in the Marines Paul worked on the AV8B-II Harrier and spent 13 great years in the Marines. After getting out he used his VRA to apply for the Fleet Readiness Center East and was subsequently hired.

Upon his arriving at FRC East Paul was assigned to the AV8B Harrier line performing maintenance task related to accomplishing PMI-1.

After spending some time on the PMI-1 line working on what Paul describes as the “greatest aircraft ever produced”, Paul then spent a brief period of time assisting with maintenance performed on the F-35 program until he eventually went to his current workspace in shop 94401 where Paul is a Pneudraulics System Mechanic working in the test cell area.

Paul says that occasionally when a worker believes management has not been fair or pushed them the wrong way, that person may not know how or may be reluctant to push back for what is right. That is when the Union can help. It is the Union’s job to fight for workers rights and enforce the collective bargaining agreement an as a Shop Steward Paul is more than willing to do just that.

For most of his adult life no matter the venue Paul has challenged wrong and fought for what is right and he says he supports everything the Union stands for. Paul says, “I am, and will always be a member of the Union”.