In 1963 thousands of citizens converged at the nation’s capitol to proclaim an affirmation and determination to right the injustices occurring throughout the South as well as other parts of the United States. 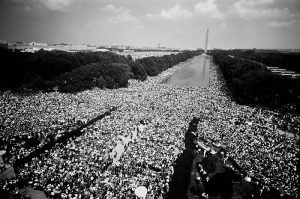 Blacks were being hung and treated like dogs and Americans were able to witness these injustices as they sat down and viewed the mean spirited actions on their television screens. In the South blacks were marching and demanding change through non-violent peaceful protest and they were joined by faith based groups and organized labor who asserted the rights of all men to be treated equally. 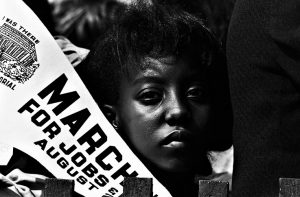 Edith Lee-Payne doesn’t remember having her photo taken at the March on Washington. What she does remember about that day, she says, is being “glad to be standing with people who wanted to make things right.”

‘This dream is still alive’

Thousands rally for racial justice at March on Washington 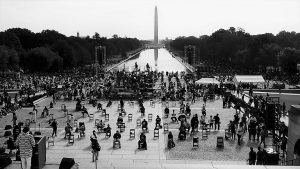 WASHINGTON – Thousands converged on the nation’s capital Friday demanding long-lasting change to end systemic racism as the country reels from police killings of Black people this year that have fueled nationwide protests.

Marchers, speakers, and organizers spoke out about reforms to law enforcement, expansions of voting rights and the power of voting in November to bring about the change they sought.

Many expressed sorrow and frustration over the many deaths of Black Americans at the hands of police, including George Floyd and Breonna Taylor, as well as the shooting last weekend of Jacob Blake.

“I wish George was here to see this right now,” Philonise Floyd, the brother of George Floyd, said as he struggled to get the words out from the steps of the Lincoln Memorial.

Speakers who addressed the masses included Martin Luther King III, who called on marchers to “become the heroes of the history we are making,” and the Rev. Al Sharpton.

“We come today Black and white and all races and religions and sexual orientations to say this dream is still alive. You might have killed the dreamer, but you can’t kill the dream because truth crushed to earth shall rise again,” Sharpton said. “Get your knee off our neck. Enough is enough.”

Sharpton organized the Get Your Knee Off Our Necks Commitment March on Washington, along with the National Action Network, marking the 57th anniversary of the historic March on Washington where Martin Luther King Jr. delivered his “I Have A Dream” speech.

Sharpton first announced the march at Floyd’s funeral. Floyd, a 46-year-old Black man, died on Memorial Day when a white police officer in Minneapolis knelt on his neck for nearly nine minutes.

The march comes as new protests erupted across the country this week after graphic video surfaced on social media showing a police officer shooting Blake, a Black man, in the back several times as he was walking to a car in Kenosha, Wisconsin.

Many of those in the crowd Friday donned T-shirts with the faces of the late Rep. John Lewis and Floyd on them. The marchers skewed young and Black but included a diverse range of protesters, all exuding a sense of unity.

The crowd swelled despite the heat. Some marchers cooled off in the Reflecting Pool in front of the Lincoln Memorial on the 90-degree day. By mid-afternoon, the march toward the Martin Luther King Jr. Memorial had begun.

“It’s all the deaths, it’s every week,” said Virginia Jones-Finley, 63, from Suffolk County, Virginia of why she came out to march. “The people are in there for the long fight, and it’s going to be a long fight.”

Organizers were stringent about COVID-19 protocols put in place ahead of time, including requiring temperature checks and masks ahead of gaining entry. Hand-washing stations were made available. Buses from COVID hot spots were discouraged as organizers pointed to their virtual march programming, where people could tune in to hear the speeches.

Marchers chanted “George Floyd” as his brother, Philonise Floyd, addressed the crowd. “This is hard,” he said. Floyd hopes lawmakers will follow the lead of marchers and enact laws that protect Black people. “I’m marching for George, Breonna (Taylor), Jacob (Blake), Pamela Turner, Michael Brown, Trayvon (Martin) and anybody else who lost their lives to evil.”

Several civil rights and social justice activists delivered impassioned speeches that echoed from the steps of the Lincoln Memorial, calling for an end to systemic racism and for the U.S. Senate to pass the George Floyd Justice in Policing Act and the John Lewis Voting Rights Advancement Act. The House has passed both bills, but Senate Majority Leader Mitch McConnell refuses to bring them up for a vote. “The reason why George Floyd laying there with that knee on his neck resonated with so many African-Americans is because we have all had a knee on our neck,” Sharpton told USA TODAY in the days leading up to Friday’s march. “What we are saying is that these two laws represent taking some of the knee off, but the systemic racism is going to take more than two laws.”

As Sharpton addressed the crowd, he said he chose to hold the rally at the Lincoln Memorial to honor the 1963 march but also to highlight the broken promises President Abraham Lincoln made a century before that.

David G. Clunie, executive director of the Black Economic Alliance, called for changes to close the wealth gap for Black families so they can build generational wealth. “We have to continue this march on every platform we have, in the streets, in the halls of Congress and in the corporate board rooms and with our vote so we can finally achieve social and economic justice,” Clunie said.

Kentucky Rep. Charles Booker, the state’s youngest Black lawmaker who recently ran for the Senate, invoked Taylor’s name, and called on America to “wake up” during his address. “The cries we’re hearing across the country right now – from Kenosha to Kentucky, from the hood where I’m from to the hollers in Appalachia, to everywhere in between – those cries let us know that we have more marching to do,” Booker said. “We cannot stop. We cannot quit. And we cannot be patient. “Breonna, I’m representing you right now,” he said.

King III also delivered a fervent speech that demanded “real lasting structural change.” Black people, King said, have been disproportionately killed and sickened by COVID-19, are targeted with voter suppression and police brutality, and are losing their jobs at higher rates than white Americans during the pandemic.  To address these disparities, King challenged the crowd to register to vote, join the fight for equality in their communities and peacefully protest.  “If you’re looking for a savior, get up and find the mirror,” King said.

Democratic vice-presidential nominee Kamala Harris made a virtual appearance in a brief video segment. She encouraged participants to learn from the work of Lewis, who was inspired to pursue a path of justice in the wake of the lynching of Emmett Till, the 14-year-old Chicago boy killed in Mississippi 65 years ago Friday.

Rebecca Anderson Fly sat in the grass holding a sign bearing a photo of her son Nicholas protesting Floyd’s death in their hometown of Minneapolis overlaid with a Langston Hughes poem. At 63, this is her first march. Although she didn’t participate in local protests because of the pandemic, Fly, the first white African American studies major to graduate from the University of Minnesota, knew she had to come to Washington when she heard Sharpton speak at Floyd’s funeral. She said her family took precautions against COVID-19, including driving two days here instead of flying and staying in an Airbnb instead of a hotel. She said she’d had her temperature checked at least three times on the way in. “It’s worth the risk,” Fly said. “It is absolutely a historical event that hopefully won’t have to happen again.”

Many attendees gathered on the National Mall with family members. Odell and Zina Ashley of Hampton, Virginia, brought their granddaughters, Jayla, 11, and Azia, 5, along with a wagon full of snacks, water, and signs. Odell Ashley said they were here to show them they can do whatever they want. “This is historic,” Odell Ashley said. “Families have to first educate their kids. They’re not being taught in school that America is built on the backs of Black people.” Though slavery ended generations ago, “we are still being oppressed” he said, adding he wants the girls to know their voices matter. He noted the nomination of Harris as another way his granddaughters see they can do anything.

Cemone Davis drove seven hours from Boston with her daughter to join the march. The 31-year-old social worker said they were “out here demanding justice.” “We’re out here just protesting for change for equality. We’re tired of young, innocent brown and Black women and men who are being killed wrongfully, unarmed,” Davis said.

Kendra Butler, 49, of Arlington, Texas, said she was in Washington visiting her cousin, Narvin Gray, and they decided to come to the march. Butler has two sons and said she’s here for them and their future. “I have two Black sons and seeing their parent out here trying to make a difference … to see them growing up asking why this is happening and I have to explain all the way back to when we were kidnapped. It’s a horrible situation to have to explain to a 15-year-old who did not learn (Black history) in high school. “As a Black parent, I want to show them that they not only have to learn but have to practice what they preach.” Butler and Gray said they’re organizing their family to vote early together, to show the younger family members it’s important. Gray, 56, of Washington, D.C., said he wasn’t alive for the original March on Washington, so he wanted to come out Friday. “I just figured it was time to do something, time to stop being a spectator,” he said.

Akiylah Christopher, 29, expressed frustration that Black people are still marching for the same issues that brought crowds to the 1963 march and at the recent spate of police shootings. “A couple of days ago Jacob Blake was shot seven times in his back,” she said. “There has to be an end to this.”

Gail Crick, a social worker from New York, said organizers of the first march and other Civil Rights Era icons did not intend for the march to go on this long. “We’re here 57 years later asking and begging for the same things: Equality. Justice. End police killings against unarmed Black people. Like this is 57 years later. We have to march for how much longer?” Crick asked. She and husband Mzee Nkosi, also a social worker, expressed discontent with the 2020 march and what they said is a message simply to vote. Nkosi said Black leaders are too often either religious leaders or celebrities or athletes who are not trained to represent other people. “How is voting and how is religion going to change the next young Black male or Black female from being shot? How is voting or religion going to address that?” he said. “It’s not being addressed today and that’s what disgusting me. People are standing up here screaming Breonna Taylor’s name, but you haven’t said anything that’s going to address it.”