The Role of the Electoral College 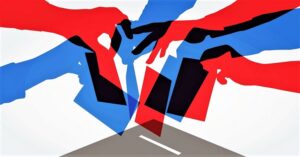 The Electoral College system has guided presidential elections since the US’s first election in 1789.

How Are Electors Chosen? – Article II, Section 1 of the Constitution states that electors can’t be a member of Congress, or hold federal office, but left it up to individual states to figure out everything else. According to the 14th Amendment, ratified after the Civil War, electors also can’t be anyone who has “engaged in insurrection or rebellion against the United States, or given aid or comfort to its enemies.”

The Constitution gave each state a number of electors equal to the combined total of representatives and senators who represent that state in the U.S. Congress. State legislatures are responsible for choosing electors, but how they do this varies from state to state. Until the mid-1800s, it was common for many state legislatures to simply appoint electors, while other states let their citizens decide on electors.

Today, the most common method of choosing electors is by state party convention. Each political party’s state convention nominates a slate of electors, and a vote is held at the convention. In a smaller number of states, electors are chosen by a vote of the state party’s central committee.

Either way, political parties usually choose people whom they want to reward for their service to and support of the party. Electors can be elected officials or party leaders in the state, or people who have some kind of personal or professional connection with the party’s candidate.

On Monday December 14, 2020, the first Monday after the second Wednesday in December, members of the Electoral College meet in their respective states and cast their official votes for president and vice president. Forty-eight states and the District of Columbia have a winner-take-all system, in which the party whose candidate wins the popular vote in a state appoints all that state’s electors to the Electoral College. It should be noted that Maine and Nebraska have a “district system.” They appoint electors depending on who won the popular vote in each congressional district, plus two electors who are pledged to vote for the overall winner of the state’s popular vote.

The 538 electors will meet in their respective state capitals to take part in the Electoral College process set out in the Constitution. President-elect Joe Biden is expected to win 306 electoral votes to President Trump’s 232. Two hundred seventy votes are needed to win the election.

Important Message….IAM Local lodge 2297 and/or this site’s administrator does not always necessarily agree or adopt the content or opinion of any other web site or author linked from, or identified in or on this site

What follows are a sampling of comments from citizens who currently are electors from their parties from a few states as provided courtesy of Aljazeera News.

Quote: “I believe the Electoral College is one of the most important pieces in the framework of our Constitutional Republic. Contrary to popular belief, we are not a democracy where the people directly elect all of their leaders or directly vote on policy. “The Electoral College is what keeps a select group of states from being able to control the entire political process in the country,” Fletcher added.

Mazurek also acknowledges the importance of the Electoral College dating back to the country’s founding – it was built as a compromise to balance the power between the federal government and states, while also ensuring proper representation. However, he believes that “we, as a nation, need to re-examine the usefulness of this institution”.

Qoute: “Twice in my lifetime, in 2000 and 2016, the candidate who received a majority of our nation’s citizen vote, lost the presidency. Should we have a system that ignores the will of the people?” Mazurek asked.

Bardonille agrees that it may be time to re-evaluate the system to better reflect the will of the people. But she also worries about whether the process is truly representative of all 50 US states and Washington, DC.

Qoute: “If you just campaign in five or seven states, you don’t have to worry about the rest of the country. And I think that’s where I have a little bit of a problem with the Electoral College because the president is the president for all 50 states.”

Quote: “When we look at it today, and we look at the growth of the population, and our ability to understand more and know who it is we’re voting for, I think it’s time that we really do start looking at the popular vote, because you can see by the past elections, that the winner of the popular vote has not won because of the Electoral College.”

Not every election in U.S. history has this unique method that exist exclusively in our democratic society has gone smoothly (Washington Post Opinion Article). There has been challenges that threatened our democracy in the past, but thus far our current system of government has withstood the test of time.