Local lodge 2297’s story….Roy Kimes and Ben Surratt, a couple of members of Local Lodge 1859 a Local chartered in 1947 comprised primarily of the machinist trades contacted the IAM&AW and asked for someone to be sent to Cherry Point, North Carolina to try an organize employees working at the then Naval Air Rework Facility, the Navy Supply and workers aboard the Marine Corps Air Station at Cherry Point, North Carolina. T. J. Smith was sent from Texas to begin the organizing efforts. In late 1967 an election was held between the International Association of Aerospace Workers (IAMAW) and the American Federation of Government Employees (AFGE). The IAM won by a 4 – 1 margin.

The Birth of a Great IAM Local Lodge

The Lodge was chartered in November of 1967 and the first contract was signed on April 8, 1968. Cecil E. Sizer was the first President of the Local. He was followed by Bobby Game, Joe Nolan, Bobby Lane, James Williams, Grover Ruppe and Theodore “Teddy” McNeal. In January of 2015 the newly elected President, Wilbert K. Woods took the oath of office and became the most recent leader of the Lodge. Nominations for new officers for years 2018-2021 occurred in September of 2017 and Brothers Woods successfully defended his leadership position during the October elections. He, along with the other elected members took the oath of office on January 22, 2018 at the monthly lodge meeting. At the meeting in September of 2020 nominations for new officers for years 2021-2024 was held and none of the required positions exceeded the number of positions needing to be filled and Brother Woods was declared the Lodge President for an additional 3 year term by a motion of acclamation from the floor and a yes vote by the members in attendance.

Brother Woods term was cut short as he was nominated and elected Directing Business Representative of Zone 110 by the Delegates attending the Inaugural Convention of the newly chartered Mid-Atlantic District Lodge 2020 in February of 2021. The elected Vice President, Rory S. Brown automatically assumed the office of President pending the swearing in of former President Woods. 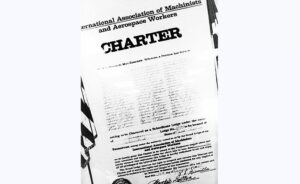