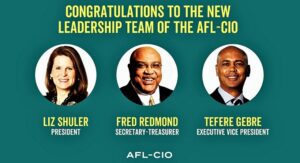 The contents of the article below appears on the website of the AFL-CIO. Congratulations to the new President and the new Secretary-Treasurer and our continued support goes out to the Executive Vice President as they lead the movement in the coming years.

August 20, 2021 – The AFL-CIO Executive Council today elected Liz Shuler, a visionary leader and longtime trade unionist, to serve as president of the federation of 56 unions and 12.5 million members. Shuler is the first woman to hold the office in the history of the labor federation. The Executive Council also elected United Steelworkers (USW) International Vice President Fred Redmond to succeed Shuler as secretary-treasurer, the first African American to hold the number two office. Tefere Gebre will continue as executive vice president, rounding out the most diverse team of officers ever to lead the AFL-CIO.

The election of Shuler and Redmond comes after the unexpected and untimely passing of Richard Trumka, who served as AFL-CIO president from 2009 until his death on Aug. 5, capping a more than 50-year career of dedication to America’s unions and working people.

“I am humbled, honored and ready to guide this federation forward,” Shuler said after her election. “I believe in my bones the labor movement is the single greatest organized force for progress. This is a moment for us to lead societal transformations—to leverage our power to bring women and people of color from the margins to the center—at work, in our unions and in our economy, and to be the center of gravity for incubating new ideas that will unleash unprecedented union growth.”

“I could not be more excited to get to work with President Shuler so we can build on the labor movement’s legacy of change, writing a new chapter that brings the promise of union membership to workers across this country,” Redmond said. “This is the right team at the right time to help bring about the economic and social justice America is hungry for.”

“Our country is at a crossroads. Now more than ever, the labor movement is the best vehicle to fight inequality, systemic racism, and attacks on our basic rights and freedoms,” said Gebre. “I am honored to work with our historic team led by President Shuler and look forward to fighting every day for working families.”

Shuler grew up in a union household—her father, Lance, was a power lineman and longtime member of Electrical Workers (IBEW) Local 125 at Portland General Electric and her late mother, Joyce, worked as an estimator in the company’s service and design department. In 1993, Shuler was hired as an organizer at Local 125. When energy giant Enron Corp. tried to muscle electricity deregulation through the Oregon Legislature, Shuler worked with a broad-based coalition of labor, community, and environmental activists to challenge and ultimately overcome Enron’s powerhouse lobbying campaign, a victory that sparked her passion for mobilizing workers to make change even when faced with overwhelming odds.

In 1998, Ed Hill, then-secretary-treasurer of the IBEW, assigned Shuler to California where she mobilized IBEW members to help defeat Prop. 226, the so-called paycheck protection initiative that threatened to silence union members in the political process. That victory prompted John J. Barry, then president of the IBEW at that time, to hire her as an international representative in the union’s Political/Legislative Affairs Department in Washington, D.C. In that role, Shuler ran grassroots political mobilization efforts and lobbied Congress on a range of issues important to working families. In 2004, she was promoted to assistant to the international president, where she served President Hill, who had succeeded to that position, in driving the agenda of the nearly 1-million-member union.

In 2009, she joined forces with Trumka, becoming the first woman elected to the position of secretary-treasurer at an AFL-CIO convention and the youngest woman ever on the federation’s Executive Council. As secretary-treasurer, she also served as the chief financial officer, turning deficits into surpluses, and steering the federation through multiple fiscal crises, including the COVID-19 pandemic.

In addition to her stewardship of the federation’s finances, Shuler led the AFL-CIO’s initiatives on the future of work, retirement security, the clean energy economy, public safety reform, workforce development, and empowering women and young workers. She is committed to busting myths about labor, leveraging the labor movement’s diversity for innovative approaches to social justice and making the benefits of a union voice on the job available to working people everywhere.

Redmond has been a USW member since 1973, when he went to work at Reynolds Metals Co. in Chicago. He became active in his local union almost immediately, serving as shop steward and eventually vice president. He served three terms as local president.

As international vice president for human affairs, Redmond oversaw the Civil and Human Rights Department, as well as the union’s shipbuilding, health care and public sector bargaining, and worked with USW allies across the country in responding to attacks on voting rights and in combating economic inequality. Redmond has a long history of leadership on various boards, including the Coalition of Black Trade Unionists and the A. Philip Randolph Institute. In 2021, Redmond was elected president of the Trade Union Confederation of the Americas, a prestigious international post.

The terms of the three executive officers run through June 2022, when delegates to the AFL-CIO Convention in Philadelphia will elect leaders for new four-year terms.