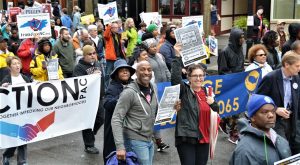 The Historic Thousands on Jones Street (HKonJ) People’s Assembly Coalition is made up of the more than 125 North Carolina NAACP branches, youth councils, and college chapters from across the state and members of over 200 other social justice organizations.

In December of 2006, under the leadership of HKonJ Convener, Rev. Dr. William J. Barber, II, who also serves as the President of the NC NAACP State Conference, HKonJ held its first organizing meeting with a diverse group of some of the state’s best organizers, political scientists, lawyers, religious leaders, and activists.

Less than two months later, the HKonJ Coalition kicked off its first annual “HKonJ People’s Assembly” in February of 2007 when over 3,500 supporters sanctioned and signed the coalition’s “HKonJ 14-Point People’s Agenda” (with detailed action steps). Since it was sanctioned and signed in 2007, the HKonJ Coalition has transformed the 14-Point People’s Agenda into comprehensive reform bills that have been introduced in legislative sessions.

The HKonJ Coalition holds an annual mobilization called the Moral March on Raleigh & HKonJ People’s Assembly. It has grown to approximately 80,000 in 2017! Each year, on the 2nd Saturday in February, thousands of HKonJ marchers flood downtown Raleigh, NC where the HKonJ People’s Assembly convenes and ultimately marches to the North Carolina State Capitol.