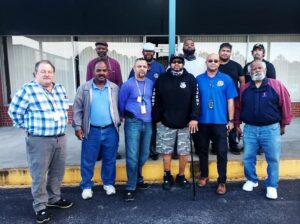 4. The Secretary Treasurer administers the funds of and for the Local Lodge. These duties include keeping an account of all receipts and disbursements and making a report of such at the Local Lodge meetings. Additionally, the Secretary Treasurer keeps records of dues payments of all members, collects dues, fees and other income of the lodge and sends the per capita tax payment to both the District and the Grand Lodges.

5. The Conductor – Sentinel of the Lodge guards the door and is in charge of the attendance book. Further duties include admitting those entitled to attend and is the official escort for visitors and guests in and out of the Lodge meeting.

6. The three (3) Trustees are in charge of all property belonging to the Lodge. The Trustees also assist the Auditing Committee in auditing the financial books and sign the audit reports of the Lodge.

7. An Auditing Committee of THREE (3) people is elected by the local lodge. They are nominated and elected at the same time and for the same three-year term as the Constitutional officers of the lodge. The Auditing Committee has the responsibility to see that the books and financial records are in proper order, that all receipts are properly entered, and that there is proper authorization and vouchers for all money paid out by the lodge.

• Examine the books and accounts of the lodge. The IAM Constitution states that audits must be conducted semiannually, at the close of June and December. The three auditors are assisted by the Trustees.

• Report on the audit each time to the membership and to the Grand Lodge.

Structure –  The Glue That Binds Us Together

Your Local Lodge is the basic building block of the IAM. This is where IAM members meet, every month, to share and debate ideas, vote on issues and elect officers for all levels of the union, right up to the International President.

There are 1,143 IAM Local Lodges in every region of the United States, Canada, Guam, Puerto Rico and Panama. Local Lodges range in size from fewer than 100 members to more than 10,000 members.

The Local Lodge has major responsibilities in the process of negotiating and enforcing the contracts that determine the wages, benefits and other terms and conditions under which our members are employed. But most Local Lodges do much more than negotiate contracts and process grievances.

Your Local Lodge can be anything you want it to be. You can make this happen by attending meetings and becoming involved. Your Local Lodge Officers are nominated and elected by you and your fellow members in a secret ballot vote. The officers include a President, Vice President, Recording Secretary, Conductor Sentinel and three Trustees. The officers’ duties are spelled out in “Article C” of the IAM Constitution.

Because a district represents many workers across a large area, its members speak with a louder voice when dealing with elected officials at the local, state and national level.

Your Business Representative or General Chairperson is employed full-time to protect, defend and advance the interests of the IAM membership. Among other duties, they negotiate contracts, process grievances and organize new members.

The people holding these positions are primarily responsible to the local and district union membership, but they also serve under the general supervision of the IAM General Vice President in charge of their territory. In most cases, a portion of their salary is supported by the Grand Lodge (see below).

Your Territory –  The IAM is divided into seven territorial jurisdictions, each headed by a General Vice President (GVP).

Five of the Territories are geographical regions (Eastern, Midwest, Western, Southern and Canadian); one is industrial (Transportation) and one (Headquarters) has jurisdiction over IAM Headquarters operations in Upper Marlboro, Maryland, the U.S. Organizing staff and the William W. Winpisinger Education and Technology Center at Placid Harbor, in southern Maryland.

Your Grand Lodge Representative (GLR) is one of the full-time staff employed by the IAM and assigned to the General Vice Presidents in the various territories. GLRs are responsible for contract negotiations, organizing, arbitrating grievances, and representing the IAM before the National Labor Relations Board and other vital activities. Before being appointed as a GLR, a person must have held continuous membership in the IAM for five years. They are paid directly by the Grand Lodge.

Your Grand Lodge Auditor (GLA) is one of the 17 full-time staff assigned on a geographical basis by the General Secretary-Treasurer to assist and serve the Local and District Lodges. The GLAs’ duties include auditing local and district financial records and training financial officers.

The Grand Lodge or International is a term commonly used to refer to the top IAM leadership or to IAM Headquarters. Actually, the term “Grand Lodge” properly refers to the IAM Executive Council and the Local Lodge delegates duly elected and seated at regular or special IAM conventions. The term “International” properly refers to the entire IAM organization, which (spanning the U.S., Canada, Guam, Puerto Rico and Panama) is international in scope.

Some Other Key Pieces of Your Union

The major building blocks of the IAM are: the Local Lodge; the District Lodge; the Territory and the Grand Lodge. But there are other components of your life in the IAM you should know about, right up front.

Your Contract will be one of more than 6,000 legally-binding agreements currently in effect between various employers and the IAM. Your contract secures your wages, hours and working conditions. But most contracts also provide an extensive array of benefits, rights and protections, including: job security, vacations, holidays with pay, life insurance, medical benefits, pension rights, sick leave, severance pay, maternity leave, shift differentials, transfer and promotion rights, time off for voting, jury duty, savings plans, moving allowances, call-in pay and many other benefits vital to the welfare of you and your family.

Non-union workers must live at the whim of the employer. Union workers have a legal, binding contract and an organization ready to back it up. Comparative studies of contracts negotiated by other unions show IAM contracts are as good as any, and better than most.

Your contract is your bill of rights on the job. Get a copy. Study it. Know it.

Your Shop Steward is your front-line representative. The steward’s primary responsibility is to enforce the union contract, and protect you and your rights. If you have a problem on the job, see your shop steward. If necessary, the steward will work to resolve your complaint through the “grievance procedure” set forth in the contract.

Your IAM steward also is a key source of information and advice about news and events in your union. If you have a question or wish to become more involved, talk with your steward.

Machinists Councils have initiated many improvements in state and provincial laws affecting health and safety, workers’ compensation, fair labor standards and other vital areas of concern.

Your link to Members of Other Unions locally or in your state or province is through the IAM’s affiliation with the American Federation of Labor-Congress of Industrial Organizations (AFL-CIO) in the United States, and the Canadian Labour Congress (CLC).

The AFL-CIO and the CLC are not unions. They are umbrella organizations of many unions representing several million workers, which seek to build a stronger labor movement by coordinating such activities as political action, worker education, organizing research, rallies and other mass mobilizations.

Special meetings are called to discuss and act upon some matters of immediate importance. For example, a special meeting might be called to transfer monies from the emergency fund of the lodge. The call for and conduct of such meetings must be in accordance with the provisions in the IAM Constitution.

One of the most important meetings is the stewards meeting. In this meeting, on the job problems can be discussed by the people who are responsible for handling the problems. Free discussion contributes to both solution and prevention of the problems. It also contributes substantially to uniform application of the agreement. Stewards meetings can be an effective forum for an exchange of ideas and information between individual stewards, and between stewards and other union leaders. Stewards assistance in supporting union programs can be vastly increased if the programs are discussed and explained at a stewards meeting. Stewards= meetings can become an effective vehicle for stewards education.

Many IAM local lodges represent several different shops or plants. Occasionally there is a need to call a meeting which is limited to the IAM members who work only in one particular shop to discuss, or act upon, a situation which directly affects only the members in that work place.

Committee meetings vary widely in content because there are so many different types of committees. The meeting may be called to discuss a problem or a program. On the other hand, the purpose of the meeting may be to review information or to interview someone who has knowledge about the specific assignment of the committee.

The Executive Board Meeting

If union meetings are to run smoothly, and if union business is to be conducted efficiently, regular Executive Board meetings (officers meetings) are necessary. Many potential problems can be avoided if there is adequate discussion and efficient planning at the executive board meeting. Executive Board recommendations can be formulated for presentation to the regular union meeting.

Organizing meetings are usually used as an instrument to bring non-union workers into the union. The format and content depends upon the specific situation. We may be meeting with workers in an unorganized workplace, or we may be attempting to sign up workers from a plant where we do not have a union shop contract.

Another type is a meeting of lodge delegates elected to a body; for example, the Grand Lodge Convention, district lodge meetings, and Central Labor Union meetings. There are also MNPL and COPE meetings. In these meetings, the delegates represent a local lodge.

Union members attend many other meetings or conferences. Leadership School would be one example. Union members may also represent their union at many types of political, civic, and consumer meetings. The types and number of meetings should be as broad as the interests of the members. Often a union meeting may supplement or complement another type of meeting. Most of the meetings within the local lodge have a measurable effect on the other meetings. For example, many shop problems may be solved at the stewards meeting. This may improve the regular meeting by eliminating or limiting discussion of personal complaints.