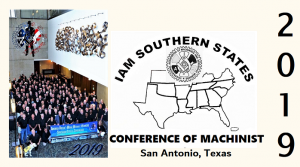 A Union Success Story With Many Chapters Not Yet Written.

During the week of August 19 -25, 2019 Fighting Machinist from the southern States made their way to San Antonio, Texas to exchange ideas and Strategize efforts to grow the Union and combat the vicious attacks on labor coming out of the current U.S. administration and right leaning Republican lawmakers.

The (see pictures) Southern States Conference of Machinist was opened with those attending reciting the Pledge of Allegiance and followed by opening statements from some of the Texas State Council leadership and welcoming remarks from the Mayor of San Antonio. Southern Territory GVP, Rickey Wallace spoke to the delegates and covered a variety of topics. 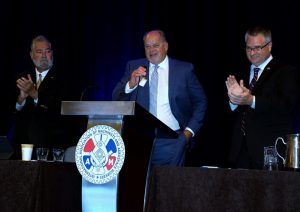 He expressed his gratitude to be back in the South after spending a couple of years as Headquarters GVP in Maryland. GVP Wallace acknowledged the great work done by the previous GVP, Mark Blondin who was also present at the Conference. 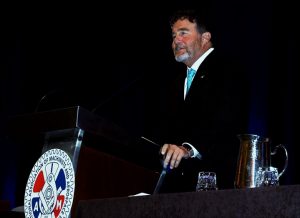 Rickey vowed to continue the efforts started during his predecessor’s reign and he the stated that he was proud to have the esteem pleasure of introducing the International President, Robert “Bob” Martinez. 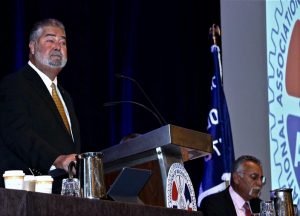 After a few minutes of continuous applause brother Martinez spoke about the tough decision he had to make bringing his right-hand man back to the South from his post across the hall from his office up at Headquarters. 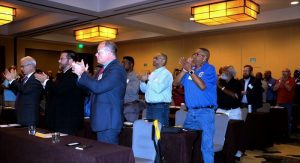 President Martinez went through a broad range of subjects currently effecting the members related to organizing and politics. He then talked about a new way of the IAM deciding who will receive the IAM’s endorsement for U.S. President. He also talked about the many benefits and services offered to IAM members and their families and re-iterated that this Union was all about its members and resources would be put back to the Local Lodges where they should have been all along. He also shared that the IAM will be shifting to a new method of funding the Disaster Relief Program in the future.

In the afternoon the delegates received information from representatives of the Democratic Governors Association and the Democratic Attorney Generals Association. The purpose of IAM State Councils is to act as the Political arm of the IAM so a lot of discussions throughout the Conference centered around politics. The other purpose of the State Councils is to make continuous efforts to “Organize the Unorganized” and there were discussions related to organizing as well.

GVP Gary Allen of the Western Territory spoke to the delegates in a way that only he can do and reminded everyone that the cost of putting on a Grand Lodge Convention is steep and he said efforts were on the way in preparation for the next Convention that will be held at San Diego, California in September of 2019. 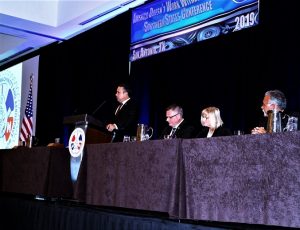 Vincent “Vinny” Ceraso who was recently appointed as Assistant Director of the IAM Employee Assistance Program is now in charge of IAM Addiction Services. 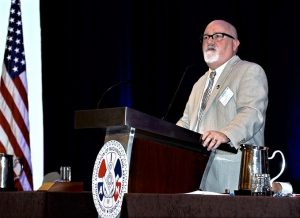 The program was created to help assist members and their families across the IAM struggling with alcoholism and drug addiction. Vinny spoke to the delegates primarily about a condition he called “Burn Out”. It really was a discussion about people who display certain signs that when recognized early by others may prevent an individual from making the permanent solution to problems which is suicide. Vinny was impressive and was very knowledgeable about a wide range of subjects related to drug and alcohol addiction and abuse and other mental health issues. It is obvious that the decision to hire Vinny was the right one for both Vinny and the IAM members and their families.

On Saturday August 24, 2019 Chris Wagner director of the Training Center located in Maryland spoke to the delegates about how to engage with the membership regarding politics and legislative actions. Chris was there to explain why we as unionist must be involved in politics if we are going to exist in a country where many try to convince workers that unions are no good. 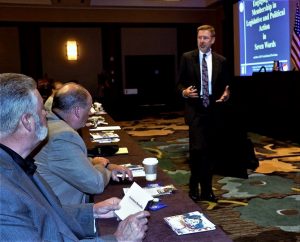 His presentation was classic Chris Wagner. He delivers information in a way that is factful and leaves one in a state of mind to want more. 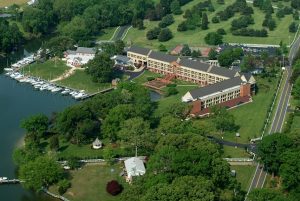 After Chris Mary McHugh who has taught at the Harbor for some time now talked with the delegates the purpose of State Councils and the need for Council to become Political Advocates. 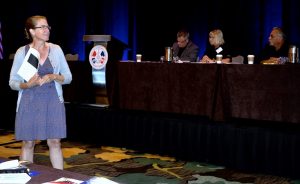 Mark Schneider, General Council of the IAMAW Headquarters informed the members in attendance about the efforts coming out to adversely effect our union and its members as a result of appointments by the current administration of ultra-conservative appointees who have track records of being anti-labor. He talked about Presidential Executive actions and recent court decisions that would impact long standing policies that would make it much more difficult for labor if such actions are not reversed at the will of the people at the voting booths. 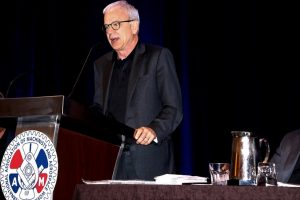 The Legal Department protects and defends the rights of the IAM and its members. The department’s lawyers advise the IAM, and its district and local lodges about legal developments relating to organizing, collective bargaining, family leave, health and safety, and many other laws affecting the rights of working people. The department represents the IAM before the federal courts and agencies, such as the National Mediation Board, the National Labor Relations Board, the Department of Labor, and other agencies. The department also keeps current on legal and arbitration developments of interest to our members and prospective members. They share this information with IAM districts and locals, and they work closely with district and local counsel on legal matters affecting IAM lodges.

Next Rick De La Fuente from the IAM Political and Legislative Department spoke to the delegates about the political landscape heading into the 2020 election season in the next few months and went over several races to watch carefully throughout the South. 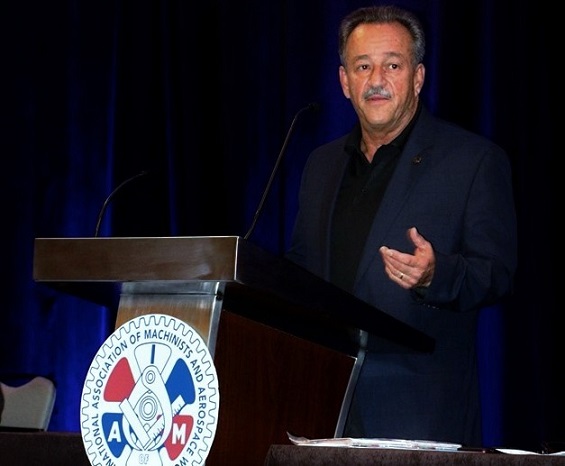 Politics is hard in the South, but labor can play a vital role in turning traditional red states into purple or blue states. 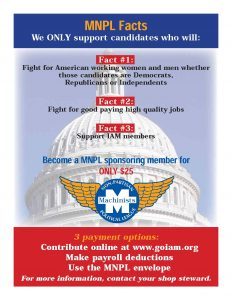 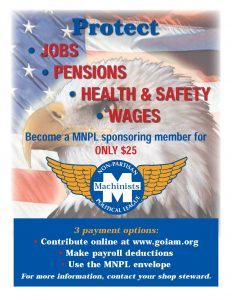 The Director of Guide Dogs of America, Russell Gittlen talked about the Guide Dogs program and thanked everyone there and their members back home for their assistance with GDA fundraising efforts. 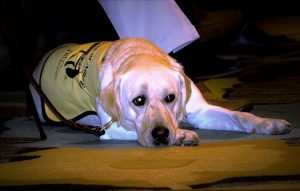 He talked about the decision to enter new assistance programs utilizing incarcerated prisoners to train service dogs to do all kinds of things that assist folks. GDA for years has only raised guide dogs for the specific purpose of providing such dogs for the visually impaired at no cost. 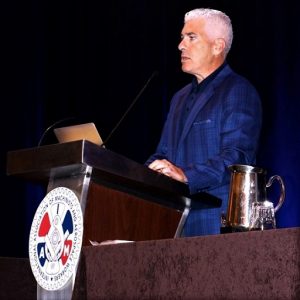 A representative from the Union Sportsman’s Alliance addressed the delegates and offered some good information and gave examples how some local have used union membership as an organizing tool for those avid sportsman that want to join that group but have to be union members to join the group. 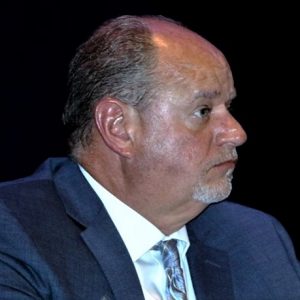 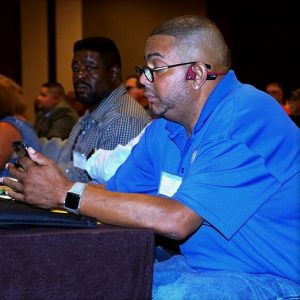 The Delegates were provided breakfast each morning on the 22nd, 23rd and 24th and they were invited to a delegate reception the evening of the 24th of August. The conference business was conducted during the event and the conference adjourned Sunday morning August 25th, 2019. What a great Conference. Hope all had safe journeys as they traveled back home.