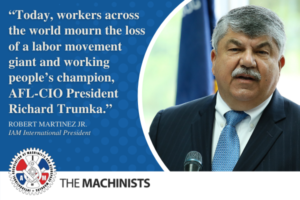 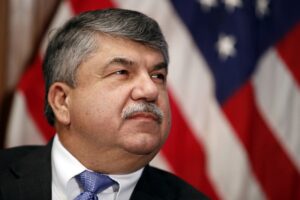 Richard L. Trumka, President of the 12.5-million-member AFL-CIO died at age 72 on Thursday August 5, 2021. An outspoken advocate for social and economic justice, Trumka was the nation’s clearest voice on the critical need to ensure that all workers have a good job and the power to determine their wages and working conditions. He heads the labor movement’s efforts to create an economy based on broadly shared prosperity and to hold elected officials and employers accountable to working families.

In 1982, at age 33, Trumka ran on a reform ticket and was elected the youngest president of the United Mine Workers of America (UMWA).

There, in addition to reforming the UMWA’s fractious bureaucracy, he led one of the most successful strikes in recent American history against the Pittston Coal Company, which tried to avoid paying into an industry-wide health and pension fund.

Trumka was elected AFL-CIO secretary-treasurer in 1995, and held that post until 2009, when he was elected president.

Trumka’s economic advocacy extends from the kitchen table and spans the globe. He has rallied international labor support for workers struggling for justice, and he has fought to end unfair trade practices and restore U.S. manufacturing strength. As secretary-treasurer, he carved out an innovative leadership role that continues today, working with programs that invest the collectively bargained pension and benefit funds of the labor movement to ensure they serve the long-term interests of workers.

Trumka’s commitment to improving life for working people began early. He grew up in the small coal-mining town of Nemacolin, Penn. Nearly all the men in his family, including his father and grandfather, were coal miners. Trumka followed them into the mines, working there as he attended Penn State and Villanova University law school.

Solidarity and his determination to improve life for all working families have driven Trumka’s life as a labor leader. Comprehensive immigration reform is a central part of that goal. Trumka’s work on behalf of immigrants is just one signal of his deep commitment to securing economic and social justice for all working people.

As Trumka looks forward, he envisions an economy of shared prosperity for all working families—an economy of rising wages, equal pay, respect at work, safe jobs, secure retirement, and the freedom for all workers to form or join unions and bargain collectively. He knows what it will take to get there: solidarity and commitment.

That is the truth Rich Trumka carried from the mines of southwest Pennsylvania. With solidarity and commitment, we all have a chance to work in dignity and live well.