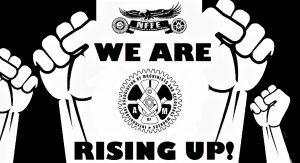 Robert Martinez, Jr., President of the powerful IAM & AW Machinist Union Urges Senators To Protect Federal Workers. The vicious attack on this nation’s federal workforce by the Trump administration represents the most disrespectful actions to date toward the federal workforce and the Unions that provide representation and protection to these professional men and women everyday. The Unions have joined together to fight and push back in the courts but what they really need is for congress to legislate and create laws that make protections against political bashing of unions that are there to provide a level playing field for workers who for the most part are patriots who just want to support the mission of the agencies in which they work.

The latest decision rendered by the courts have allowed the President’s Executive orders to be put on fact-track read… How the Executive Orders Affect Federal Workers…but the International Association of Machinist and Aerospace Workers (IAM) and the National Federation of Federal Employees (NFFE) are fighting back and the battle is just beginning.

Martinez wrote a letter to Senators urging that they sign on to a measure led by Senator Peterson and do the right thing for our federal workers and provide through statutory legislation the protections needed to protect Federal Employees and the Unions that represent their interest.