William “Bill” Dougan, National President of the National Federation of Federal Employees (NFFE-IAM) retires. His last day on the job was December 15, 2016. We. the members of Local Lodge 2297 along with others throughout the IAM who had the opportunity to work with him wish him well. Enjoy Brother! Dougan founded and was elected chairman of the Federal Workers Alliance, a collective effort of 22 unions representing more than 300,000 federal employees. As a member of the National Council on Federal Labor-Management Relations, Dougan worked with top administration and agency officials to build strong labor-management forums…See Full Imail story  Bill Dougan Retirers 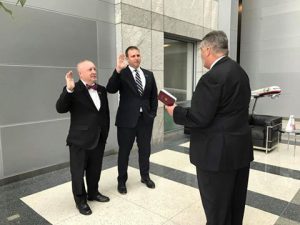 “I am humbled and grateful for the opportunity to serve as national president of the National Federation of Federal Employees, America’s first federal employee Union,” Erwin stated.  “NFFE is in its 100th year representing our nation’s dedicated and exemplary federal workforce. Through war and other uncertainty, the members of this Union have continually protected, preserved and inspired the foundation from which the greatest democracy on Earth flourishes. We are proud of our history and we are committed to continuing that legacy for centuries to come.”