In November 1987 a 17-man crew from the Naval Air Depot, Cherry Point, North Carolina (NAD) and Lockheed Georgia Corporation flew from McMurdo Station to the crash site and began repairs to ready the airplane for flight. They replaced the four rebuilt engines, propellers, and flight controls, as well as repaired the main nose gear, nose-gear landing struts, skis, instrumentation, and radome, They also repaired the airplane’s left side where the propellers ripped through the hull and replaced other hull sections with specialty tempered metal.

During the 5 weeks required to repair the airplane, their work was often complicated by high winds, blowing snow, and temperatures that frequently dropped to -30°C (-22°F). More than once the small modular building and tent-like shelters that made up their camp were buried in snow by fierce storms. After another U.S. LC-130 crashed at site, killing two Navy passengers, the team redoubled its efforts. (See the March 1988 issue of the Antarctic Journal of the United States for details.)

On 8 January 1988 Mr. Jim Herman, the official inspector from NAD, certified that the airplane was ready. VXE-6 flight crews ran final tests. At 6:10 pm on 10 January, Juliet Delta 321 followed the escort into the air and headed toward McMurdo Station.

Members of Local Lodge 2297 and other depot employees pictured above  were part of a team of artisans and engineers, supervised by a depot management representative “Cannonball” Barker, who traveled to the bottom of the globe to attempt the recovery of a LC130 “Ski Bird” that had been buried in snow for approximately 16 years after a crash occurred as a result of an explosion shortly after takeoff.

Even though the events described in this post happened almost 40 years ago it should show those who believe the federal workforce is not important to this nation how over and over again our members volunteer to go wherever they are needed in the face of danger to support our American leadership in the world.

A field repair team left from the Naval Aviation Depot at Cherry Point on Nov.14, 1987, set up their base camp, known as “D-59,” on Dec. 1 and immediately started work on the aircraft. By the time the crew left D-59, they had replaced all four of the aircraft’s engines, two main landing gear systems, struts and small components.

The LC-130 was flown from the crash site Jan. 10, 1988, by a five-member Navy crew headed by Cmdr. Jack Rector, commanding officer of the Navy’s Antarctic Development Squadron, to McMurdo Station. Rector likened the recovery of the plane to the rising phoenix of Egyptian mythology. “I think that’s what we’re going to name the airplane,” he said.

Once the salvaged aircraft was in the air, it was escorted by another LC-130 back to McMurdo, with both aircraft flying low to maintain visual contact. On arrival at McMurdo, Rector said of the salvaged plane, “she flies great.”

From McMurdo the aircraft was flown to a repair facility in Christchurch, New Zealand, where it is undergoing additional work before being put back into service in Antarctica.

On 4 December 1971, the LC-130 aircraft Juliet Delta 321, piloted by LCDR Ed Gabriel, was damaged during takeoff from this site (“D59”) 125 miles south of the French station Dumont D’Urville and about 850 miles from McMurdo Station. It had just completed the second of five supply flights to the French Carrefour traverse party, part of a U.S./French glaciology project. The traverse was on its way to the Soviet station Vostok from Dumont D’Urville. After an uneventful open field landing and resupply, during the takeoff at an altitude of about 50 feet, two JATO bottles (165-pound solid-fuel rocket bottles used for “jet assisted take off” from soft open-field landing sites) broke loose from their attachment points on the left rear fuselage. One went up the tailpipe of the #2 (inboard left side) engine; the other struck the #2 propeller. The propeller went to pieces, and some of the flying debris took out the #1 engine and propeller, with several large pieces entering the cargo compartment.

Since they had just gotten airborne, the sudden loss of power from engines 1 and 2 with 3 and 4 still at maximum power caused the plane to yaw hard left with the right wing coming up rapidly. Ed rolled the aileron full right wing down, applied full right rudder, and closed the throttles. He managed to get the plane straight and level just prior to the impact (which collapsed the nose ski).

He resisted any urge to power the plane out of the problem, otherwise they would have struck the snow in an extremely left wing down attitude and the aircraft would have cartwheeled itself to pieces, with loss of life.

The pilot was awarded an Air Medal for his amazing presence of mind. Besides pilot LCDR Gabriel, some of the others in the 8-man Navy crew were LTJG Bob Schmucke (copilot), LT Billy Bounds (1st navigator), ENS Brian Paul (2nd navigator), AE1 Virgil Harris (flight engineer), AT3 Tom Gregg (flight avionics tech), and ABH1 Glenn Schellenberger (loadmaster). There also were two passengers on board. Although no one had been injured, the 10 men had to live in survival shelters for more than 3 days until the weather improved.

Eventually conditions improved enough to allow a rescue plane to land. The Navy personnel who arrived to inspect the aircraft and investigate the accident determined that salvaging it would be too dangerous and costly; the salvage crew was given only an hour to cut loose the most valuable instruments and the aircraft was left to get buried.

The accident investigation revealed that painters at Aero Corp, the company that did the last overhaul, had completely painted over the slider mechanisms on the latches. This could cause binding and jam the release mechanism. This was the first year Aero was doing overhauls, prior to that Lockheed did all the reworks and no paint was applied to these parts. One result of the investigation was a modification to the JATO mounts so that the bottles could no longer be jettisoned in the air.

Here is the Antarctic Journal article about the crash, history/321crash but it is rather brief compared to the above detailed description from Jim Landy who was around for the accident investigation. Jim was aboard the last JATO mission on 321 before the crash, and they had problems with the JATO latches on the left side, two of the bottles failed to release.

In 1977-78 VXE-6 mounted an assessment/survey mission to evaluate the feasibility of recovering 321. The four engineers recommended recovery, which was originally planned for the 1979-80 or 1980-81 austral summers, but budget restrictions cancelled the project.

An Interesting Fact: The LC-130 is a variant of Lockheed’s C-130 turboprop transport plane that has been a workhorse of many of the world’s air forces ever since 1952. Lockheed still manufactures the plane but the LC-130 variant, with its polar modifications, was never built in large numbers. Only 10 of the planes remain in flying condition; six are used by the Navy to support the science foundation’s Antarctic programs.

They had a Replacement Cost of $40 Million.

The crash site was directly south of Dumont D’Urville on an annual traverse route, so the aircraft location was a landmark on these trips.

In 1982-83 Mike Savage accompanied one of these traverses as part of the NSF automated weather station (AWS) project. He was probably the first American to visit 321 since 1977-78.

In 1987-88 the team returned to complete the project. Unfortunately, before the recovery could be completed, another LC-130 (131) crashed at the recovery site on 9 December 1987, with two deaths and a total loss of the aircraft. Killed were LCDR Bruce Bailey and AK2 Donald M. Beatty. 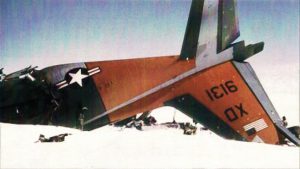 At about 0900 local time at the site of the recovery effort for the LC-130 that had crashed in 1971, another VXE-6 aircraft (XD-03, or 159131) crashed while bringing in additional supplies and personnel. Of the eleven on board, two men died: LCDR Bruce Bailey, the squadron maintenance officer, and AK2 Donald M. Beatty, a supply petty officer. The most seriously injured survivor was LCDR Einer “Ernie” Corelli who suffered a serious leg injury; he and 3 other injured crew members were medivacked to Christchurch after they had been flown to McMurdo. This was the first fatal VXE-6 disaster since 1969.

Navy corpsman HM2 Barney Card was the only medical person on site at the time…he responded quickly, rushed to the crash site a mile away from the camp, helped rescue people, and later deputized other folks to watch over the injured on a one-on-one basis until the first rescue aircraft could arrive from McMurdo…eight hours after the crash, delayed by bad weather.

The aircraft was the only one that had been modified with camera equipment for polar mapping…as a result, the USGS mapping program for the season had to be cancelled (and no more USGS maps of Antarctica were ever produced). Also, the aircraft was to have been used to take a photo update of the 1983 USGS photo map of Pole.

The crash site was about 860 miles northeast of McMurdo and about 125 miles from the Adelie Coast in east Antarctica, directly south of the French station Dumont D’Urville…..

Nevertheless, the project continued to completion, and 321 flew back to McMurdo on 10 January 1988. Then it went to Christchurch for further rehab, it returned to VXE-6 service a couple of years later.  This is the Antarctic Journal article about this historic flight.

More about LC130-131 and the unexpected crash

2 in Navy Killed as U.S. Research Plane Crashes in Antarctica

According to the National Science Foundation, which administers and finances American research programs in Antarctica, the airplane, a Lockheed LC-130 Hercules, crashed during landing at 9 A.M. yesterday. The ski-equipped plane was flying to a remote ice airstrip to aid in repair work being done to a similar plane that crashed in the same location 16 years ago.

The airstrip is situated about 860 miles northeast of McMurdo Station, the main American base in Antarctica and about 100 miles inland from Adelie Coast in eastern Antarctica.

”The plane caught fire when it hit,” Guy Guthridge, a spokesman for the science foundation, said yesterday. ”But luckily, the crew working on the old LC-130 crash was on hand to extinguish the fire and pull out the victims.”