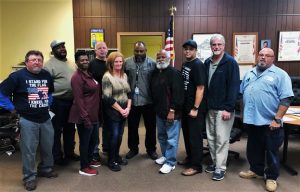 On Wednesday, January 23, 2019 Elected Delegates from affiliate IAM lodges 350, 2924, 1859 2296 and 2297 met at the District 110 business office located in Havelock, North Carolina to participate in the regularly scheduled monthly meeting. There were no representatives at this meeting from affiliate lodge 757 but each Recording Secretary of each affiliate lodge was notified of the meeting in which nominations and elections if necessary was scheduled to take place in accordance with the requirements of the District Lodge 110 bylaws.

Pictured are the new officers and auditors who were each nominated without in a non-contested manner. A motion to elect through acclamation was made from the floor and was seconded and passed by the delegates in attendance.

The District Delegates were elected to represent the interest of their local lodge membership at the same time and in the same manner as they nominate and elect their local lodge officers. Each affiliated lodge has five (5) delegates who are empowered to make motions and vote on any motion made during meeting. The officers of District Lodge 110 are President, Vice President, Recording Secretary, Secretary-Treasurer, Conductor-Sentinel and three (3) Trustees. Also nominated were three (3) Auditors who are not officers and are not members of the Executive Board. The District President appointed an Educator and a Communicator with the blessings of the Executive Board members.

Not pictured in the photo is the Vice President who was recovering from a medical procedure and could not attend because of health concerns.

The Delegates, except for the Vice President, were administered the “oath of office” by the current Directing Business Representative, Anthony Cruz.

The President, Theodore “Teddy” McNeal, first filled that position back in January of 2000 after the then President at the time was nominated for the Directing Business Representative position and resigned his position as President due to bad health and to focus on his election for that position. McNeal served the remainder of his term that ended in January of 2001 and has been re-elected for each three (3) year term since. If he manages to complete this latest term he would have served as the President of District Lodge 110 for a total of twenty-two (22) years out of its fifty-three (53) year existence.

Congratulations to all the elected members.