The following comments appeared in a post on the North Carolina State Council of Machinist Facebook page several days before Congressmen Walter B. Jones death. At the time he was move to a Hospice facility and the following was posted to acknowledge the contribution the Congressman made to our members in Eastern North Carolina;

“The Congressman worked hard to protect military and civilian jobs in his District. He always cared about veterans and he never believed in placing american men and women in harms way unless it was absolutely necessary and even then he felt that only congress should be able to approve these kinds of actions. He looked out for the military bases and serving for years on the House Armed Forces Committee made sure financial resources were slated for eastern North Carolina bases. Congressman Jones supported DoD federal workers was instrumental in defunded the harmful National Security Personnel System (NSPS) and later the elimination of that law. The Congressman always felt that american men and women should not be in Afghanistan and was never shy about his opposition to troops being there. If you held a conversation over three minutes he was sure to bring up the U.S. debt and I’m almost sure he wouldn’t approve of the current administrations total disregard for the national debt. The Congressman didn’t like the fact that President Bush lied about Iraq possessing weapons of mass destruction after 911 and prior to the invasion of Iraq in 2003. He thought President Obama was going to keep his promise to end the Iraq and Afghanistan military actions and bring the troops home but he was very disappointed at decisions made by Presidents of both parties to leave troops there. I have at this time and I will always have respect for this honest and dedicated servant of the people of North Carolina and the U.S. citizens. I pray that his family will be strong during this time of challenge. Your love one in my opinion is a great man. God bless you all”. 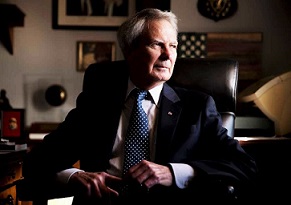 Taken from article appearing in the New York Times

Walter B. Jones Jr., a Republican congressman from North Carolina whose district included Marine Corps Base Camp Lejeune, was a staunch supporter of the American-led invasion of Iraq in 2003. He had even helped rebrand french fries as “freedom fries,” as a slap at France for opposing the war.

But he had an epiphany one day at a memorial ceremony at Camp Lejeune for Marine Sgt. Michael Bitz, 31, who had been killed in Iraq shortly after the invasion while trying to evacuate his wounded comrades.

During the ceremony, the sergeant’s 2-year-old son, Joshua, dropped a toy. A young Marine in dress uniform reached down to pick it up and handed it back.

“And the boy looked up at him, and the Marine looked down, and then it hit me,” Mr. Jones told Mother Jones magazine years later.

“This little boy would never know his daddy.”

Mr. Jones’s grief at this scene would lead to a dramatic political conversion against the war, putting him in opposition to his own party and President George W. Bush. It also led to years of trying to atone for his earlier support.

Mr. Jones died on Sunday, his 76th birthday, in Greenville, N.C., a statement by his office said. His health had been declining since September. Before he won re-election in November to his 12th term, he indicated that it would be his last. He then broke his hip in mid-January and was in hospice care at his death.

Walter Beaman Jones Jr. was born on Feb. 10, 1943, in Farmville, N.C., where he grew up and lived most of his life. His mother, Doris (Long) Jones, was a homemaker. His father, Walter Sr., worked for an office-supply company and served in the State Legislature before being elected to Congress in 1966. A Democrat, the elder Mr. Jones represented eastern North Carolina until he retired in 1992.

Walter Jr. graduated in 1961 from Hargrave Military Academy in Chatham, Va., and attended North Carolina State University from 1962 to 1965, when he transferred to Atlantic Christian College, now Barton College, in Wilson, N.C. He graduated with a bachelor’s degree in history in 1966, the same year he married Joe Anne Whitehurst; she and their daughter survive him.

Out of college, Mr. Jones joined the National Guard and became a wine salesman as well as a Catholic. In 1982 he was drafted by local Democrats to fill out the term of a state representative who had died in office. Mr. Jones served for 10 years, and when his father retired from Congress, he ran for his seat.

Walter Jr. lost the 1992 Democratic primary. He tried again in a reconfigured district in 1994, by which time he had switched parties; a strong foe of abortion rights, he felt more comfortable as a Republican. He won that race and rode into office as part of a Republican wave led by the new speaker, Newt Gingrich.

Courtly and well-liked, Mr. Jones was voted the nicest member of the House of Representatives in a 2004 survey of top Capitol Hill staffers by The Washingtonian magazine.

His political impulses were basically libertarian, and he occasionally strayed from Republican orthodoxy. He fiercely opposed measures that would contribute to the national debt and voted against President Donald J. Trump’s tax-cut bill for that reason. He denounced the influence of money in politics and urged Congress to counter the Supreme Court’s Citizens United decision

But after the terrorist attacks of 9/11, when President Bush sought congressional authority to use military force in Iraq, Mr. Jones gave his wholehearted support.

Filled with patriotic fervor, he made perhaps his biggest publicity splash when he pushed for the menus in the Capitol cafeteria to be changed to read “freedom fries” instead of “french fries,” an idea he borrowed from a North Carolina restaurant chain.

He was roundly applauded by Republicans and ridiculed by Democrats. (Tina Fey, on “Saturday Night Live,” said that in France, “American cheese is now referred to as ‘idiot cheese.’ ”)

It was only about a month later that Mr. Jones attended the Camp Lejeune memorial ceremony that would affect him so profoundly and lead him to apologize, many times, in public.

“I did not do what I should have done, to read and find out whether Bush was telling us the truth about Saddam being responsible for 9/11 and having weapons of mass destruction,” Mr. Jones told NPR in 2015.

“Because I did not do my job then, I helped kill 4,000 Americans,” he said. “And I will go to my grave regretting that.”

Many of the citizens in the congressional district under his representation believed the Congressman to be a man of integrity. The passage below I believe sums it up;

What Satan has planned for our harm

Integrity will transform to good.

Adhering to morals gives us peace

Teaching us to respond, as we should.

Sometimes we must go against the flow

Questioning what our shepherd’s may say.

For they are not God, only human

And for their integrity, we pray.

Though faith we can stay undiminished

Keeping ourselves entire and whole.

While struggling to preserve our soul.

With honor we obtain uprightness

And by love and compliance we gain grace.

Improving the standard of our race.

Those who laugh at the straight and narrow

Will not hear God’s answer to their cry.

Those who yearn to earn their integrity

Must not steal, persecute or lie.