We Salute “Toys For Tots” 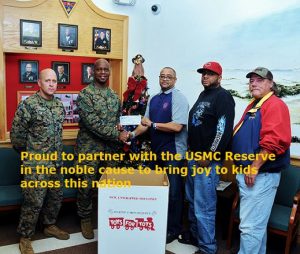 Pictured to the left are officers and members of Local 2297 along with the Commanding Officer, Vincent E. Clark of the FRC East and the local marine “Toy for Tots” coordinator, SSGT Rykhus as the Lodge President Wilbert Woods delivers a $500.00 donation in December of 2016. Along with President Woods are Vice President, Rory Brown and Chief Steward, Paul Spinner.

In 1996, the Commander, Marine Forces Reserve expanded Toys for Tots to cover all 50 states by authorizing selected Marine Corps League Detachments and selected local community organizations (generally veteran Marine), located in communities without a Marine Reserve Center, to conduct toy collection and distribution campaigns in their communities as part of the U. S. Marine Corps Reserve Toys for Tots Program.

In 1999, the Commander, Marine Forces Reserve delegated authority to the President, Marine Toys for Tots Foundation to approve and manage local Toys for Tots campaigns conducted in communities without a Reserve Unit. 2001: Despite the trauma the nation experienced as a result of the September 11th attacks in New York City, Washington, DC and Pennsylvania, the economic downturn and the anthrax scare, the 2001 U. S. Marine Corps Reserve Toys for Tots Campaign was the second best in the previous 54 year history of the program. Local campaigns were conducted in 388 communities covering all 50 states, the District of Columbia and Puerto Rico. This was the most extensive coverage to date.

In 2005, the Better Business Bureau Wise Giving Alliance reported that Marine Toys for Tots Foundation had met all 20 of its standards and had been designated as an accredited charity. 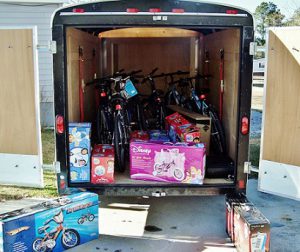 From 2006 to the present the Foundation has continued to receive, on an annual basis, the accolades noted above. Over its life span, the Marine Toys for Tots Program distributed over 494 million toys to over 230 million less fortunate children.

Participation in this effort whether through financial donations of toy contribution has become a tradition in the local lodge and this is an annual presentation. The only exception was one year when the Executive Board adopted a plan to purchase new bicycles to donate instead.