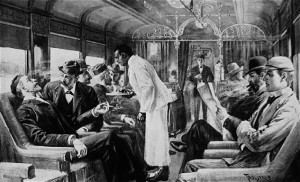 When a Pullman Car was leased to a railroad, it came “equipped” with highly-trained porters to serve the travelers. The cars were staffed with recently freed slaves, whom Pullman judged to be skilled in service and willing to work for low wages.

Soon, The Pullman Rail Car Company was the largest employer of blacks in the country, with the greatest concentration of Pullman Porters living on Chicago’s South Side.

In their home neighborhoods, to be a Pullman Porter was considered a prestigious position. The job offered a steady income, an opportunity to travel across America, and a life largely free of heavy physical labor, rare for blacks in that era.

Historian Timuel Black recounts, “They were good looking, clean and immaculate in their dress, their style was quite manly, their language was very carefully crafted, so that they had a sense of intelligence about them … they were good role models for young men.”

But the porters were also mistreated, underpaid, overworked and subjected to countless indignities on the job. “A Pullman Porter was really kind of a glorified hotel maid and bellhop in what Pullman called a hotel on wheels,” explains former porter and historian Greg LeRoy. ”

The Pullman Company just thought of the porters as a piece of equipment, just like another button on a panel – the same as a light switch or a fan switch.”

Pullman demanded 400 hours a month or 11,000 miles – sometimes as much as 20 hours at a stretch — and paid ridiculously low wages (in 1926, an average of $810 per year — about $7,500 in today’s economy). “It didn’t pay a livable wage, but they made a living with the tips that they got, because the salary was nothing, ” says Lyn Hughes of the A. Philip Randolph Pullman Porter Museum.

The company expected its employees to pay for their own meals, supply their own uniforms and shoe polish, and allowed them only short naps on couches in the smoking car. Disgruntled porters began to question their situation and decided to take on the enormously powerful company.

In 1925, the porters formed a union called The Brotherhood of Sleeping Car Porters. This marked the beginning of a twelve-year struggle for dignity, better working conditions, and fair pay. (Its leaders were charismatic black activist A. Philip Randolph and former porter Milton Webster, head of the Chicago union local.)

Their eventual triumph marked the first time in American history that a black union forced a powerful corporation to the negotiating table. It was a significant step forward for black equality.

The union members learned how to organize and negotiate. They discovered that even in a time of great prejudice in America, blacks could effect change if they stood together and persevered. They would later apply these techniques to the civil rights movement.

The Senior Constituency Group of the AFL-CIO

In September of 1972, more than 1,200 black union officials and rank and file members, representing thirty-seven different international and national unions, met in Chicago for two days to discuss the role of black trade unionists in the labor movement. Five black labor leaders, alarmed that the AFL-CIO Executive Council had taken a “neutral” position in the 1972 presidential election between incumbent Richard Nixon and challenger George McGovern, called this founding conference of the Coalition of Black Trade Unionists. They believed AFL-CIO President George Meany had ignored the voice of black trade unionists. Neutrality, they believed, would contribute to the re-election of Nixon. The call they issued for the conference noted:

“We are concerned that the re-election of Richard Nixon will almost certainly result in four more years of favored treatment for the rich and powerful; continued unemployment; frozen wages; high prices; appoint- meant of additional members of the U.S. Supreme Court who are conservative and insensitive to the rights of workers, minorities, and the poor; more repression and restriction of civil liberties; and the reversal or total neglect of civil rights.”

These five leaders, who formed the initial steering committee of CBTU, were:

Turnout at the initial meeting, which took place September 23-24, 1972, at the LaSalle Hotel, constituted the largest single gathering of Black unionists in the history of the American labor movement. It was a bold, empowering action. While the impetus for the Chicago conference was the presidential campaign, the most significant development was the establishment of a permanent organization, the Coalition of Black Trade Unionists. The delegates made it clear that black workers were ready to share in the power of the labor movement at every level of its policy-making process. CBTU would be a progressive forum for black workers to bring their special issues within unions as well as act as a bridge between organized labor and the black community.

The most electrifying moment at the Chicago conference came when Nelson “Jack” Edwards’ introduced Bill Lucy, the tall, young, charismatic international secretary treasurer of AFSCME, who also was then the highest ranking black elected labor leader in the world. Lucy succinctly expressed CBTU’s fundamental characteristic is its independence in his remarks:

“At the present time, we occupy a very important and critical position in the politics of this nation, both in terms of the trade union movement as well as the political parties of this country. We are in nobody’s pocket, do not intend to get in anybody’s pocket, and we are going to assume a position of full partners. You see, we don’t want anybody to be making decisions for us any longer, because we are quite capable of making decisions ourselves. We don’t want to be a thorn in anybody’s side, but we don’t want to be a pivot for anybody’s heel.”

Since its founding, CBTU has enhanced the influence and power of black workers in the trade union movement and in their communities. CBTU has led efforts to open more union leadership positions to women, African Americans and other minorities. In the AFL-CIO elections for new leadership in 1995, CBTU challenged the federation “to reorganize itself to reach out to those who need it most”, women and minorities. Subsequently, the AFL-CIO enlarged its Executive Council. Today, African Americans, women, Asian Pacific Islanders and Hispanic leaders hold 13 of the council’s 51 seats. This infusion of diversity is helping to energize the labor movement in the new globalized American economy.

The influence of women on CBTU’s development has been indispensable, from day one. Between 35 and 40 percent of the 1,200 delegates who attended the first CBTU conference were black women; five women served on CBTU’s first executive committee; and leaders like Alzada Clark, Rev. Addie L. Wyatt, Ola Kennedy, Agnes Willis, Lillian Roberts and Geraldine Johnson made sure the new labor organization focused on the needs of all black workers. In 1982, the CBTU Executive Council organized the National Women’s Committee, whose first chairperson was Rev. Addie Wyatt. The current chairperson is Anita Patterson. The CBTU Women’s Committee conducts conferences and workshops that empower participants to improve their unions and uplift their communities.

From CBTU’s inception, countless elected officials and appointees-from mayors, judges and governors to members of Congress, U.S. Presidents and cabinet appointees-have benefited from the Coalition’s commitment to political action and empowerment. CBTU was an early supporter of the Congressional Black Caucus; the backbone of union support for the late Harold Washington’s victorious Chicago mayoral campaign in 1983; the catalyst for the appointment of U.S. Labor Secretary Alexis Herman, the first African American to hold that cabinet position.

CBTU is justifiably proud of its history of solidarity with human rights fighters and freedom movements here and around the world, especially in Africa, Latin America, and the Caribbean. CBTU condemned the Pinochet military junta in Chile and the Abacha junta in Nigeria; supported Caribbean workers exploited by anti-union American monopolies; fought for diplomatic recognition of liberated nations in Southern Africa; consistently supported self-determination for residents of the District of Columbia, who are denied full voting representation in Congress, even though they live and pay taxes in the nation’s capitol.

Long before black freedom fighters finally uprooted white minority rule throughout Southern Africa, CBTU was relentlessly attacking the violent exploitation of black workers. In 1974, CBTU was the first American labor organization to pass strong resolutions calling for an economic boycott and a change in U.S. policy toward Southern Africa. CBTU President Bill Lucy was one of the founders of the Free South Africa Movement in 1984, which conducted the most effective grassroots anti-apartheid campaign in the U.S. with substantial participation from black workers recruited by CBTU. CBTU also played a major role Nelson Mandela’s historic 11-day visit to the United States in 1990, four months after he was released from a 27-year prison term. Lucy spearheaded an unprecedented fund-raising effort that netted $250,000 from American unions to finance Mandela’s tour and help the African National Congress ease the transition to black majority rule. The late Cleve Robinson, a CBTU founder and long-time opponent of apartheid, served as co-chairman for the official Mandela visit to New York.

A Proud Legacy with so many achievements and so many more heroes. As 21st century dawns, CBTU is proud to have existed longer than any other African American labor organization in history. We are also proud that our legacy-empowering yet unfinished-has enriched the American labor movement.