It had only happened 12 times in the IAM’s 127-year history, but this week it happened one more time. Tom Buffenbarger officially handed over the title of IAM International President to Bob Martinez, Jr., a 35-year IAM member who has held leadership positions up and down the ranks of the Machinists Union. At a ceremony at IAM Headquarters in Upper Marlboro, MD, Martinez took his oath of office and delivered remarks to IAM members and staff.

“Our fight and our work is noble and it is good,” said Martinez, a Texas native and U.S. Navy veteran. “Securing workplace fairness, dignity and justice – so it shall continue.” Watch the entire ceremony – which includes remarks from Buffenbarger, new Headquarters General Vice President Rickey Wallace, and AFL-CIO President Richard Trumka. 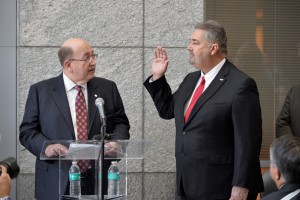