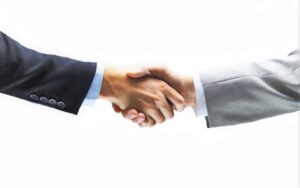 Most work related conditions are subject to negotiations. The long standing practice at IAM Local Lodge 2297 is that the Negotiating Committee will be comprised of the four (4) primary lodge officers and the Chief Stewards. They are responsible for developing worker friendly proposals addressing conditions of work that directly affect bargaining unit employees who are represented by Local Lodge 2297. The results of such efforts will subsequently appear in the pages of the Negotiated Agreement i.e., (Collective Bargaining Agreement [CBA] ) between the Parties.

Question: What constitutes a compelling need?

(a) The rule or regulation is essential, as distinguished from helpful or desirable, to the accomplishment of the mission or the execution of functions of the agency or primary national subdivision in a manner that is consistent with the requirements of an effective and efficient government.

(b) The rule or regulation is necessary to ensure the maintenance of basic merit principles.

(c) The rule or regulation implements a mandate to the agency or primary national subdivision under law or other outside authority, which implementation is essentially non-discretionary in nature. 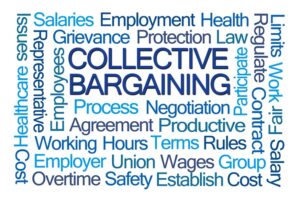 What is Mediation and the role of a Mediator

Collective bargaining mediation is the voluntary process in which a third-party neutral assists labor and management in to reach agreement on a negotiated collective bargaining agreement. Mediation is a tool through which the federal government supports sound and stable labor management relations. As neutrals, FMCS mediators provide a third-party perspective and leverage the expertise of the skilled negotiators at the table to address the core interests of the negotiating parties. During negotiations, a mediator uses his/her knowledge of the industry, similar negotiated settlements, the parties, and the issues to guide negotiators past potential barriers to settlement. Mediators may offer procedural or substantive suggestions and recommendations throughout the process. However, a mediator does not have authority to impose a settlement or to determine contract terms. The FMCS receives appropriated funding to provide its labor-management services. There is no charge to the parties for collective bargaining mediation. 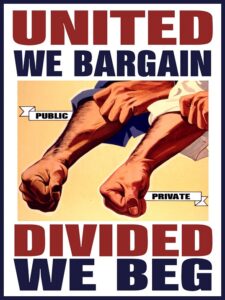 What if any impact does President Biden’s Executive Order have on the union’s negotiation proposals?

All materials/information below is taken from an article appearing on govexec.

The new Biden Executive Order on Protecting the Federal Workforce requires: The head of each agency subject to the provisions of chapter 71 of title 5 United States Code shall elect to negotiate over the subjects set forth in 5 U.S.C. 7106 (b) (1) and shall instruct subordinate officials to do the same.

This is not the first time a President has required agencies to bargain over 7106 (b) (1). President Clinton in Executive Order 12871 at Section 2 (d) required: The head of each agency subject to the provisions of chapter 71 of title 5, United States Code shall: negotiate over the subjects set forth in 5 U.S.C. 7106(b) (1), and instruct subordinate officials to do the same. This language is almost identical to the Biden Executive Order.

A doubt as to the authority of President Biden to require bargaining over 7106 (b) (1) is based on a federal court decision during the Clinton Administration (National Association of Government Employees Inc. vs Federal Labor Relations Authority et al. United States Court of Appeals, District of Columbia Circuit, 179 F.3rd946 (1999).) which held that EO 12871 does not constitute a section 7106 (b)(1) election. The Clinton Executive Order required agencies to negotiate but did not require them to make an election under Section 7106 (b) (1). Apparently, the drafters of the Biden Executive Order believe that the insertion of the word elect in the new Executive Order cures the problems from the earlier decision of the DC Circuit on the Clinton Executive Order.

This is what Section 7106 (b) (1) provides: “Nothing in this section shall preclude any agency and any labor organization from negotiating … at the election of the agency. On the number, types and grades of employees or positions assigned to any organizational subdivision, work project, or tour of duty, or on the technology, methods, and means of performing work.”

Even though agencies have rarely elected to bargain over 7106 (b) (1) subjects, there is considerable case law defining the meaning of its terms. Even in some ways more importantly, the FLRA has decided in number of cases, the interaction between Section 7106 (b) (1), (2) and (3) and Section 7106 (a).

Rather than reiterate what you can learn from reading the FLRA Case Outline, I would like to look at some of the practicalities of bargaining over 7106 (b) (1).

First: Just because the union can bargain over (b) (1) doesn’t mean management has to agree to its proposal. Under the Biden Executive Order, management can’t refuse to bargain because it’s a 7106 (b) (1) subject. An agency cannot assert in response to a negotiability appeal that since a proposal is 7106 (b) (1) proposal it has no obligation to bargain. If negotiability is not asserted it will be up to FSIP to decide which proposal should be adopted.

Third: Since there is not a long history of the parties bargaining over 7106 (b) (1), there will undoubtedly be a lot of confusion about whether a union proposal is a 7106 (b) (1) proposal. Also, some of the language in 7106 (b) (1) in very similar to section 7106 (a) language. As an example, 7106 (a) (1) provides that nothing shall affect the authority of an agency to determine the number of employees. 7106 (b) (1) provides that nothing shall preclude an agency from negotiating at the election of the agency on the numbers of employees.

For example, if a union proposes the number of employees to be assigned to a shift, that considered for negotiability purposes an exercise of a 7106 (a) or 7106 (b) (1) by management. The answer may be that it doesn’t matter because of what’s provided under 7106 (b) (2) and (3). These provisions commonly called procedures and appropriate arrangements provide that an agency will negotiate over the exercise of any authority under this section. The authority could be easily construed to mean 7106 (a) rights and any authority electively exercised by an agency to bargain over 7106 (b) (1) issues.

The Federal Labor Relations Authority (FLRA) dealt with the potential conflict between 7106 (a) and 7106 (b) (1) in a number of cases, all contained in the Case Outline mentioned above.

The FLRA has interpreted what numbers, types, and grades assigned to an organizational subdivision, work project, or tour of duty means as well as the meaning of technology, methods and means of performing work. Once again, the cases supporting these interpretations are found in the Case Outline. They are available for your reading pleasure.

Let’s look at the questions: The first question will be whether a union proposal is in fact a 7106 (b) (1) proposal. Does it deal with methods and means and technology within the meaning of 7106 (b) (1) or is it a numbers, types and grades proposal? As noted above, the FLRA has case law defining these terms. However, because there has been, relatively speaking, such little actual bargaining over 7106 (b) (1) the case law is not exhaustive as it is with respect to 7106 (a) issues.

The second question is whether the union proposal is a 7106 (a) proposal or is it a 7106 (b) (1) proposal. The FLRA has said when the agency says it’s a 7106 (a) right and the union says its 7106 (b) (1) right the FLRA will first look at whether the union proposal meets the procedures and appropriate arrangements criteria for a 7106 (a) right. If it doesn’t meet the criteria it will then look at 7106 (b) (1). However, as noted above, in most cases everything stopped because there had to be an election by the agency and in almost all cases there was no election.

The third question is, if there has been an agency election under 7106 (b) (1), what standards should be used in deciding whether the union’s proposal is negotiable? As an example, a union proposes that there be 14 employees assigned to particular shift. The agency wants to retain full discretion as to how it staffs a shift. Assuming the proposal meets the standard for numbers types and grades, does the union’s proposal have to be a negotiable procedure or appropriate arrangement under 7106 (b) (2) or (3) or is the proposal subject to substantive bargaining which would not require it to meet the criteria for procedures and appropriate arrangements. Is 7106 (b) (1) an exception to 7106 (a) and therefore not subject to 7106 (b) (2) and (3)?

It is not clear to me what the standard would be, but since election to bargain over 7106 (b) (1) subjects could be seen as the exercise of an authority under Section 7106, it appears they could be subject to 7106 (b) (2 and (3) criteria. As noted above, an agency has the right to declare a proposal non-negotiable either on the basis that it is contrary to law i.e., not a 7106 (b) (1) subject or is not a negotiable procedure or appropriate arrangement. Getting past the first hurdle of whether the Biden Executive Order is a legal election on 7106 (b) (1) is just the beginning of understanding what bargaining over 7106 (b) (1) is all about.

One thought on “A Discussion On Federal Sector Collective Bargaining”