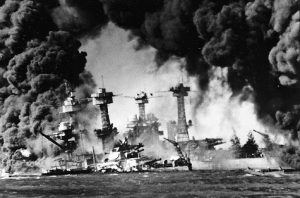 On December 7, 1941, Japanese planes attacked the United States Naval Base at Pearl Harbor, Hawaii Territory, killing more than 2,300 Americans. The U.S.S. Arizona was completely destroyed and the U.S.S. Oklahoma capsized.  A total of twelve ships sank or were beached in the attack and nine additional vessels were damaged. More than 160 aircraft were destroyed and more than 150 others damaged.

A hurried dispatch from the ranking United States naval officer in Pearl Harbor, Commander in Chief Pacific, to all major navy commands and fleet units provided the first official word of the attack at the ill-prepared Pearl Harbor base. It said simply: AIR RAID ON PEARL HARBOR X THIS IS NOT DRILL.

The 7 December 1941 Japanese raid on Pearl Harbor was one of the great defining moments in history. A single carefully-planned and well-executed stroke removed the United States Navy’s battleship force as a possible threat to the Japanese Empire’s southward expansion. America, unprepared and now considerably weakened, was abruptly brought into the Second World War as a full combatant.

Eighteen months earlier, President Franklin D. Roosevelt had transferred the United States Fleet to Pearl Harbor as a presumed deterrent to Japanese aggression. The Japanese military, deeply engaged in the seemingly endless war it had started against China in mid-1937, badly needed oil and other raw materials. Commercial access to these was gradually curtailed as the conquests continued. In July 1941 the Western powers effectively halted trade with Japan. From then on, as the desperate Japanese schemed to seize the oil and mineral-rich East Indies and Southeast Asia, a Pacific war was virtually inevitable.

By late November 1941, with peace negotiations clearly approaching an end, informed U.S. officials (and they were well-informed, they believed, through an ability to read Japan’s diplomatic codes) fully expected a Japanese attack into the Indies, Malaya and probably the Philippines. Completely unanticipated was the prospect that Japan would attack east, as well.

The U.S. Fleet’s Pearl Harbor base was reachable by an aircraft carrier force, and the Japanese Navy secretly sent one across the Pacific with greater aerial striking power than had ever been seen on the World’s oceans. Its planes hit just before 8AM on 7 December. Within a short time five of eight battleships at Pearl Harbor were sunk or sinking, with the rest damaged. Several other ships and most Hawaii-based combat planes were also knocked out and over 2400 Americans were dead. Soon after, Japanese planes eliminated much of the American air force in the Philippines, and a Japanese Army was ashore in Malaya.

These great Japanese successes, achieved without prior diplomatic formalities, shocked and enraged the previously divided American people into a level of purposeful unity hardly seen before or since. For the next five months, until the Battle of the Coral Sea in early May, Japan’s far-reaching offensives proceeded untroubled by fruitful opposition. American and Allied morale suffered accordingly. Under normal political circumstances, an accommodation might have been considered.

However, the memory of the “sneak attack” on Pearl Harbor fueled a determination to fight on. Once the Battle of Midway in early June 1942 had eliminated much of Japan’s striking power, that same memory stoked a relentless war to reverse her conquests and remove her, and her German and Italian allies, as future threats to World peace.

Saturday, December 6 – Washington D.C. – U.S. President Franklin Roosevelt makes a final appeal to the Emperor of Japan for peace. There is no reply. Late this same day, the U.S. code-breaking service begins intercepting a 14-part Japanese message and deciphers the first 13 parts, passing them on to the President and Secretary of State. The Americans believe a Japanese attack is imminent, most likely somewhere in Southeast Asia.

Sunday, December 7 – Washington D.C. – The last part of the Japanese message, stating that diplomatic relations with the U.S. are to be broken off, reaches Washington in the morning and is decoded at approximately 9 a.m. About an hour later, another Japanese message is intercepted. It instructs the Japanese embassy to deliver the main message to the Americans at 1 p.m. The Americans realize this time corresponds with early morning time in Pearl Harbor, which is several hours behind. The U.S. War Department then sends out an alert but uses a commercial telegraph because radio contact with Hawaii is temporarily broken. Delays prevent the alert from arriving at headquarters in Oahu until noontime (Hawaii time) four hours after the attack has already begun.

Sunday, December 7 – Islands of Hawaii, near Oahu – The Japanese attack force under the command of Admiral Nagumo, consisting of six carriers with 423 planes, is about to attack. At 6 a.m., the first attack wave of 183 Japanese planes takes off from the carriers located 230 miles north of Oahu and heads for the U.S. Pacific Fleet at Pearl Harbor.

Pearl Harbor – At 7:02 a.m., two Army operators at Oahu’s northern shore radar station detect the Japanese air attack approaching and contact a junior officer who disregards their reports, thinking they are American B-17 planes which are expected in from the U.S. west coast.

Near Oahu – At 7:15 a.m., a second attack wave of 167 planes takes off from the Japanese carriers and heads for Pearl Harbor.

Pearl Harbor is not on a state on high alert. Senior commanders have concluded, based on available intelligence, there is no reason to believe an attack is imminent. Aircraft are therefore left parked wingtip to wingtip on airfields, anti-aircraft guns are unmanned with many ammunition boxes kept locked in accordance with peacetime regulations. There are also no torpedo nets protecting the fleet anchorage. And since it is Sunday morning, many officers and crewmen are leisurely ashore.

The Americans are taken completely by surprise. The first attack wave targets airfields and battleships. The second wave targets other ships and shipyard facilities. The air raid lasts until 9:45 a.m. Eight battleships are damaged, with five sunk. Three light cruisers, three destroyers and three smaller vessels are lost along with 188 aircraft. The Japanese lose 27 planes and five midget submarines which attempted to penetrate the inner harbor and launch torpedoes.

Escaping damage from the attack are the prime targets, the three U.S. Pacific Fleet aircraft carriers, Lexington, Enterprise and Saratoga, which were not in the port. Also escaping damage are the base fuel tanks.

The casualty list includes 2,335 servicemen and 68 civilians killed, with 1,178 wounded. Included are 1,104 men aboard the Battleship USS Arizona killed after a 1,760-pound air bomb penetrated into the forward magazine causing catastrophic explosions.

In Washington, various delays prevent the Japanese diplomats from presenting their war message to Secretary of State, Cordell Hull, until 2:30 p.m. (Washington time) just as the first reports of the air raid at Pearl Harbor are being read by Hull.

News of the “sneak attack” is broadcast to the American public via radio bulletins, with many popular Sunday afternoon entertainment programs being interrupted. The news sends a shockwave across the nation and results in a tremendous influx of young volunteers into the U.S. armed forces. The attack also unites the nation behind the President and effectively ends isolationist sentiment in the country.

President Franklin D. Roosevelt: Yesterday, December 7, 1941—a date which will live in infamy—the United States of America was suddenly and deliberately attacked by naval and air forces of the Empire of Japan.

The United States was at peace with that nation, and, at the solicitation of Japan, was still in conversation with its government and its emperor looking toward the maintenance of peace in the Pacific. Indeed, one hour after Japanese air squadrons had commenced bombing in the American island of Oahu, the Japanese ambassador to the United States and his colleague delivered to our secretary of state a formal reply to a recent American message. While this reply stated that it seemed useless to continue the existing diplomatic negotiations, it contained no threat or hint of war or armed attack.

It will be recorded that the distance of Hawaii from Japan makes it obvious that the attack was deliberately planned many days or even weeks ago. During the intervening time the Japanese government has deliberately sought to deceive the United States by false statements and expressions of hope for continued peace.

The attack yesterday on the Hawaiian Islands has caused severe damage to American naval and military forces. I regret to tell you that very many American lives have been lost. In addition, American ships have been reported torpedoed on the high seas between San Francisco and Honolulu.

Japan has, therefore, undertaken a surprise offensive extending throughout the Pacific area. The facts of yesterday and today speak for themselves. The people of the United States have already formed their opinions and well understand the implications to the very life and safety of our nation.

As commander in chief of the Army and Navy I have directed that all measures be taken for our defense. But always will our whole nation remember the character of the onslaught against us. . .

Another way to look at Pearl Harbor