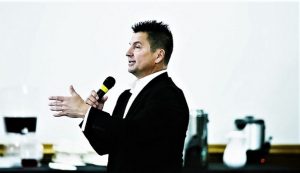 For the second time in the history of Local Lodge 2297 a Directing Business Representative has been welcomed to participate on the staff of the IAM Southern Territory. The announcement of Anthony Cruz as an appointed Special Representative comes about 16 years later than that of now Grand Lodge Representative Joe Greaser. Local Lodge 2297 represents federal employees who work at the Fleet Readiness Center East, an overhaul and repair facility located aboard Marine Corps Air Station Cherry Point in Eastern North Carolina. In an interview with District Lodge 110 President Theodore McNeal I ask what he thought might attribute to the fact that such great unionist are found in that small but powerful Local? His response was “Must be something in the water”. Brother McNeal says he is proud of both of these brothers who have dedicated their lives to helping others.