A Partial History of the Women Marines

Since 1918, women have answered the call to serve proudly in the United States Marines and the role of women in the Marines has evolved and expanded. All Women Marines can look forward to the future proudly, while never forgetting the women who made this future possible.

1 October 1997: The first African-American female colonel in the Marine Corps was promoted to that rank during a ceremony at MCAS Cherry Point, North Carolina. Colonel Gilda A. Jackson, a native of Columbus, Ohio, made Marine Corps history when she achieved the rank of colonel. She was serving as Special Projects Officer, 2d Marine Aircraft Wing at the time of her promotion. 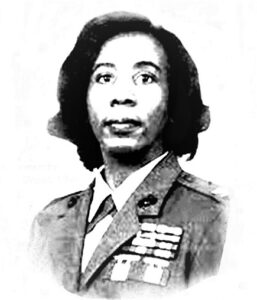 After serving as commanding officer of FRC East from 2000-2001 (executive officer 1998-2000), Jackson joined Lockheed Martin in Fort Worth, Texas. She is the F-35 Sustainment, Logistics Operations director, a position she has held since 2012. In her previous positions at Lockheed Martin, she oversaw the design, development, planning and execution of the F-35 Lightning II Training System. She served on the Penn State Material and Manufacturing Board, on the Ohio.

April 15, 2002 – An Ohio Dominican alumna and decorated Marine Corps veteran was honored as one of the most outstanding alumni of Ohio independent colleges and universities for paving the way for women and minorities in the U.S. Armed Forces. Retired Colonel Gilda A. Jackson was inducted into the Ohio Foundation of Independent Colleges Hall of Fame on April 10, 2002 in Columbus, OH. The Evening of Excellence featured the induction of outstanding alumni from various Ohio Independent Colleges who were nominated on an annual basis because of their accomplishments.

In 1997, Col. Jackson, of the U.S. Marine Corps, became the first African-American woman ever to achieve the position of colonel in the Marine Corps as well as the first female commanding officer in the 56-year history of the Cherry Point Naval Aviation Depot.

Now retired, Col. Jackson has decided to enter the political world, as a candidate for the North Carolina House of Representatives. Other recipients of the OFIC Evening of Excellence include: Wilmer Albert Cooper, Founding Dean of the Earlham School of Religion; Professor Emeritus, ESR; Karen Weaver Spero, Chairman, Spero-Smith Investment Advisers, Inc.; and Brian L. Stafford, Director of the U.S. Secret Service.

Col. Jackson is a 1968 graduate of Bishop Hartley and a 1975 graduate of Ohio Dominican College where she received her B.A. in Economics. Her mother, Cathagenia Jackson, still resides in Columbus. She currently resides in Emerald Isle, NC. “Being selected for this award is an honor. My accomplishments are shared with many fine and outstanding people,” said Jackson. “I would not be who I am today without the support and help I have received from family, friends, mentors, co-workers and people I have met throughout life. I am truly grateful for their help and support.”