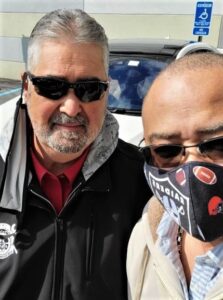 Above picture of IAM President, Robert Martinez, Jr. with Wilbert K. Woods shortly after he was sworn in as the Business Representative for Zone 110.

There are six (6) affiliated locals in Zone110

Except for a brief time in the late 90’s Wilbert Woods has been a dues paying union member of IAM & AW Local 2297 since beginning his work as a federal employee at the rework facility at Cherry Point, N.C. He began his career working at Alameda, California close to 20 years ago and has been a federal employee for 35 years.

He was approached after work one day about joining the union, IAM&AW and at first he had some reservations. After considerable thought he decided he would give it a try.

Shortly after, he joined and began to be exposed to things going on in the workplace that he considered to be kind of shady and less than fair. He approached his union representative about these issues and not one time did the representative not at least try to bring about the desire result. This impressed him and he has been sold on the union ever since.

As of March 1, 2021 will have the opportunity to represent all employees in the bargaining units located in Zone 110 of District Lodge 2020. He takes this responsibility very seriously and becomes the 4th member of Local Lodge 2297 to be elected as a Business Representative.

He was first elected President of IAM Local 2297 in October of 2014 and was sworn into office in January of 2015. He was re-elected to that position in 2017 and 2020. During his 1st campaign he only asked that the members give him a fair opportunity to show what he would do to protect their rights and their future at FRC East Cherry Point.

To quote President Woods “Every day we are awaken with a certain amount of mental, emotional, and physical energy that we spend throughout the day”. I promise to expend the majority of that energy worker for the members as well as those who are potential members.

He promised the he would do everything that his ability will allow to fight the good fight for the workers.  Here are some of his attributes that make him a man of integrity;

Below is a small sampling of his Background